This post is part of a virtual book tour organized by Goddess Fish Promotions. Enter to win a $50 Amazon gift card. Click on the tour banner to see the other stops on the tour.

After the sudden deaths of two previous Computer Love Inc. CEOs, Marius takes control of the company. Embracing the talents of his godson, John, and his best friend, Zak, he hires the boys to oversee the Companion Services Division. Marius refines his breakthrough technology, the Brain Machine Download, and as a result, creates his double, M2, as the prototype. Together, they ignite the future of Computer Love Inc. by acquiring an elite team of scientists to expand the company’s technological boundaries. Meanwhile, Marius struggles with the government’s demands for a clandestine initiative - the Secret Service Companion. Between the looming government presence and the overwhelming force behind his new team of inventors, can Marius survive the outcome of his own creations?

The room remained silent. Ten pairs of eyes were fixed on Marius, not even a single person consumed with a hangnail or discreetly checking messages on his or her unit.

“So then – and please forgive me when I say this, because often it seems that social delicacies elude me; I’m sure you all possess unique and likeable personalities, but really – it’s your brains that we’re after here.”

Again Marius paused. By now, some gazes had shifted: faces looked amongst one another, gauging reactions – animals measuring a threat by observing the rest of the pack.

“Have you ever heard someone say, ‘Can I pick your brain’? Essentially, that’s what I’d like to do here. I need your brilliance, and I implore you to consider this proposal. I would like to perform a Brain Machine Download on each of you in order to capture your intelligence. Is everyone familiar with what the theory of the BMD is, or what it entails?”

If they were not familiar, no one spoke up or raised a hand. Again, the looks flashed around the room – there were a few who wanted to know more, but, seeing that no one else had first spoken up, they remained quiet. Marius had seen it. Even in the wisest, cowardice lives… 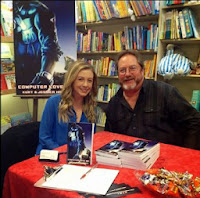 Kurt and Jessica Hansen reside in northern New Jersey . Kurt has worked in the aerospace electronics industry for over three decades and enjoys the outdoors, writing, and composing music. Kurt is easily recognized with a guitar in his lap, a pencil in his mouth, and a piece of paper in front of him.

The Computer Love Inc. series is a collaborative effort between father and daughter.

a Rafflecopter giveaway
Posted by 3 Partners in Shopping at 9:08 PM