After discovering she's infertile, Lydia Ryder has all but convinced herself that she doesn't need children or a family to be happy. All she needs is her camera, her passport, and a damn good manicure. And maybe, maybe a sexy male travel companion. But when her job as a magazine photographer lands her in the small town of Maple Grove, NH, a precocious ten year old and her single father barge into Lydia's life, turning what she thinks she wants onto its head. In this town full of happily ever afters, Lydia finds herself wishing for things she had sworn off long ago...


When Cameron Tripp's wife passed away from heart disease, he thought he'd never find love again. He certainly never would have expected a woman like Lydia Ryder to waltz into his life and awaken his dormant heart and libido. But despite his better judgment, Cam finds himself drawn to the vivacious and argumentative outsider. He quickly learns that, like him, she knows all about misplaced trust, heartbreak, and how quickly a family can fall apart if you let it.


As impassioned arguments morph into frenzied kisses, the two wonder if one weekend can ever be enough. Despite lacking a maternal side, can Lydia connect with his ten year old daughter? And when Cameron finally learns the true nature of Lydia's article, the trust he worked so hard to build crumbles once again. With such doubts filling their minds, is there any hope that Lydia and Cameron will be able to start a new life together? 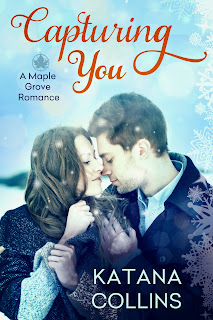 
It didn't take long before Cam was lying on the floor, face up, a half-empty bottle of wine clutched in a hand. His ceiling fan was so dirty. He'd have to make a mental note to dust up there next time. If he'd even remember in this inebriated state. Do drunk people use words like inebriated? Apparently this one did.


He looked to his left, swiveling his head without lifting it off the floor. Callie was lying face down on his couch. One leg dangled off the edge and knuckles that grasped her bottle of vino scraped the floor. Her cheek was squished making her loose lips pucker. Sensing his stare, she opened her eyes; they were red and bloodshot. “You're so drunk,” she slurred.


“You're an enabebler,” Cam attempted to speak. Clearly it wasn't going well. He could tell in his own head it was wrong and his sister broke out in a fit of giggles.


“Because you weren't twenty-one before,” he grunted and bringing the bottle to his lips, took another swig. The sweetness wasn't so much of an issue after your sixth glass. And after almost a whole bottle? You didn't even taste it anymore.


“Listen, mister. I've been twenty-one for...” she counted on a few fingers, her eyes rolling into the back of her head as though the extra thinking hurt, “many months now. There's no excuse!” Her elbow gave out and she fell back down onto the couch with an oomph.


“Yeah, well, I've got reponsibilities,” he said. “Responsilibilities,” he tried again. “Re-spons-ib-ilities.” There. He got it, finally.


Callie broke out into another fit of girlie giggles and rolled off the couch onto her back next to Cam. He couldn't help but laugh too. And damn it felt good to laugh. It was creaky; unused. But nice, nonetheless. “So seriously,” Callie's eyes were only half open, “who's the city chick?”


Cam groaned. Lydia. Everything came back to Lydia lately. “I need to be drunker if we're going to talk about this,” he lifted the bottle again, the halogen lamp reflecting off the tinted glass. It was noticeably lighter than before.


Callie burst out laughing again. “Okay, I think you've had enough,” she reached across him and took the bottle from his hands.


He closed his eyes, picturing her face. That sleek chestnut hair; grey eyes with little specks of gold like his granite countertops; high cheekbones and large, plump lips. When he opened his eyes, Callie was looming over him smiling. “You're thinking about her, aren't you?”


He groaned. “She has a boyfriend. It's a moot point.”


“She doesn't have to. She has a boyfriend and she lied about it.”


Callie arched an eyebrow. “Which only proves that she's into you, too.”

“Okay,” he said, “Now you're the one with the drunken drunk talk.”


“All the more reason to do it. Neither of you will get attached.”


“You want me to use her to get my feet wet again?”


She snorted a laugh. “You sure you want me answering that?”


twelve and you collect My Little Ponies.”


Grabbing a pillow, she hit him playfully across the face. “Just think about it, bro. We all just want you to be happy.”


Happy. The word rolled around in his mind like a marble on a slick surface. It was too soon to be happy. Too raw. He liked the wound—liked keeping it fresh and open. It was his only connection left to Hannah.


Cam pushed off the ground, room spinning as he got to his feet. With a groan, he grabbed a plastic bag, gathering the empty bottles.


“What are you doing?” Callie mumbled.


Cam rubbed his eyes with a knuckle. “I can't have Maddie or mom coming home tomorrow to find these. I'll take them out to the recycling tonight.”


Callie gurgled something that half sounded like words before she rolled over, smashing her face into a pillow.


The recycling was locked in a wood shed on the edge of the property to protect their garbage from bears. Cam shivered, his unlaced boots crunching in the snow as he staggered to the shed. He had to pause a moment, leaning on the banister to make the snow below him stop spinning.


At the water's edge was a vision. A beautiful woman bundled in a coat staring out into the night. Cam blinked. Was he just seeing things? Surely he couldn't trust his eyes when he was this drunk.


But then, the woman turned and he was struck by Lydia's stunning svelte body, backlit by moonlight. She took his breath away and they both stood frigidly staring at each other.


Tossing the recycling into the shed, he huffed toward the frozen lake and Lydia stood there, unmoving. His insides wrenched and he didn't bother thinking.


“Cam,” she said as he approached. Only he didn't let her get anything else out. He grasped her tiny waist with both hands and tugged her into him, sloping his mouth down over hers in a kiss that stirred fire even on the coldest night.


She moaned into his mouth and their tongues explored each other in wild, feverish movements.


. “God, you are beautiful,” he whispered against her. “And smart. And talented.” Then, dragging his lips up her neck, he scraped his teeth along the tender flesh there. Her muscles quivered against his mouth and he grinned, loving that he could affect her this way.


He kissed her jaw up to her chin, pausing just in front of her full, curvy pout. “What are you doing to me?” He rasped.


Lydia's eyes danced, fluttering open to meet his gaze. She licked her lips and swallowed. “You've been drinking.”


“Only a little,” he lied. Cam tried to blink his alcohol fogged brain back into commission, but all he could see was Lydia. All he wanted was Lydia. He didn't care about the wine. Or the auction. Or the fact that she had some boyfriend waiting for her in New York. He just wanted to live in the moment and for once do what his heart desired. “I've wanted to do this since the moment I saw you,” he groaned and pressed his lips to hers once more.


Katana Collins Katana Collins splits her time evenly between photographing boudoir portraits and writing steam-your-glasses romances. Between navigating life as a small business owner, a first-time homeowner, and a newlywed, Kat is in a constant state of "OHMYGODINEEDCOFFEENOW."


She is the author of the Soul Stripper trilogy, Wicked Exposure, and the graphic novel, Cafe Racer, co-written with Sean Murphy.


She and her comic book artist husband commute back and forth as they please between Brooklyn, NY and Portland, ME with their ever-growing family of rescue animals (up to two dogs and a cat and still counting!). She can usually be found hunched over her laptop in a cafe, guzzling gallons of coffee, and wearing fabulous (albeit sometimes impractical) shoes.