All Things to Everyone: by Aldred Chase Review Tour and Giveaway

All Things to Everyone: Sinister Sydney – Book One


Fifteen year old Paul Blake is not looking forward to spending quality time with his grandmother, who has never taken an interest in him. This time however, things are different because he reveals to her an ability to see the supernatural. She wants to train him but she is not the only one who is keen to help him develop his talents. He soon realizes that he can't be all things to everyone and he will have to make some difficult decisions. His choices will lead him into a terrifying fight for survival that will test his skill and courage to the limit.

All Things to Everyone is the first book in the Sinister Sydney Series: stories where the supernatural pierces the thin skin of modern life in Sydney.

Later that evening, I approached Mum in the back garden. She was smoking furiously, sucking the life out of one of her cigarettes like she had a grudge against it, the glowing orange tip a beacon in the dark.


I wondered if Mum had set things up earlier, letting me go into the lounge and bursting in a few minutes later to attack the members of the Ladies Historical Society. In her own mind, she would now have a valid excuse to leave. “We can’t walk out, Mum,” I said. “We have nowhere to go.” 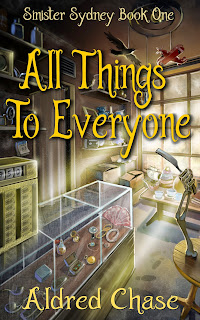 A mosquito buzzed around us. Mum shot out a jet of smoke at it and it fell silent. “Your gran is crazy,” she said.


Mum took a savage drag on her cigarette, making it flare up like a bush fire. She breathed out a spray of smoke. “Your gran and her cronies, emphasis on the crone, believe this suburb is full of


mournful ghosts, wandering ghouls and open graves,” she said. “This might seem funny or harmless or even a little pathetic and sad, but it’s done a lot of damage over the years.”


She lit a new cigarette from her old one and stubbed the old one out in a plant pot, grinding it into the soil. “Mum joined the Ladies Historical Society when I was a little girl,” she said. “Dad saw it for the nonsense it was, but Mum became obsessed with it. It drove a wedge between them and it broke Dad’s heart, literally.


Aldred Chase is the author of the Nobody’s Fool Quartet and the Sinister Sydney Series. His first experience of fantasy fiction was reading ‘The Hobbit’ at school, and he has been hooked on the genre ever since. His favorite places for writing are cafes and park benches, but he does most of his work sitting at his desk. His best ideas come to him when he is travelling by train or walking by the sea.


His current writing project is ‘Lurker’, the second book in the Sinister Sydney Series.


All Things To Everyone can be purchased at:

I just finished reading All Things to Everyone and I really liked it. The storyline was good and the characters were great. This is the first book in The Sinister Sydney Series. It is a great start to a good series  and I am looking forward to the next book in this series.  Even though Paul Blake is only 15 he is a strong character who has to make hard choices in his life. I give this book a 4/5. I was given this book for the purpose of a review and all opinions are my own.

$25 Amazon GC RAFFLECOPTER CODE: a Rafflecopter giveaway
Posted by 3 Partners in Shopping at 12:33 AM