The world is a pretty straightforward place. Even for medium Sara Stone things seem pretty simple, aside from the whole talking to spirits bit. But when the spirits get too hard to handle and Sara ends up admitted to a mental hospital, the world starts to seem a lot less straightforward. First her family disappears, including her four year old son. Then she gets the sneaking suspicion that not only are the staff at the mental hospital somehow connected, but they also have no intention of ever letting her leave the hospital.


Everything changes when Sara has her first visitor in three months. Daniel is handsome, friendly, and a complete stranger. When he promises to spring her from the hospital and swears that everything she's experienced is completely real, Sara has no choice but to believe him. But once she reaches a run-down Victorian house in the tiny Alabama town her rescuer calls home, the last thing she expects to discover is that every memory she has is a lie. 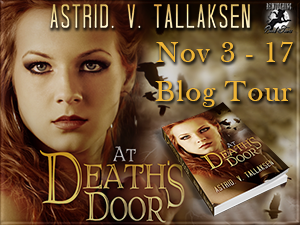 Daniel reveals a world filled with angels, demons, and an impending war humans know nothing about. Sara wants to ignore her role in the whole mess – all that matters is solving the mystery of where her son has gone. But the forces of Heaven, Hell, and the Heart have other plans for her. Can she find her child before the world comes crashing down?


Debut author Astrid V. Tallaksen grew up in North Alabama. She was fortunate to be raised with a heart for stories of creatures and places outside of this world. Her love of reading quickly became a love of writing.


She spent several years creating content and helping writers to improve their craft on the online world of Althanas, a creative writing workshop in the guise of a roleplaying forum.


A self-avowed nerd, Astrid loves science fiction, comic books, and eighties fantasy movies in the vein of The Princess Bride and Labyrinth.


Her geekiness extends to annual volunteer work at the massive sci-fi convention known as Dragon*con every year in Atlanta, Georgia.


In the odd times that she's not immersed in geekdom or writing, Astrid loves to sing karaoke, crochet, and spend time with her family and pets.