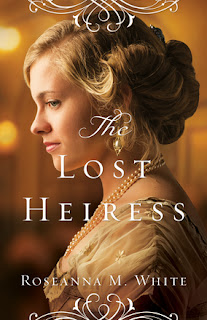 Sweeping Romance and Mystery in the Edwardian EraBrook Eden has never known where she truly belongs. When her friend Justin uncovers the fact that she is possibly a missing heiress from Yorkshire, Brook leaves the sun of the Mediterranean to travel to the moors of the North Sea and the estate of her supposed family.

The mystery of her mother's death haunts her, and though her father is quick to accept her, the rest of the family and the servants of Whitby Park are not. Only when Brook's life is threatened do they draw close--but will their loyalty come too late to save Brook from the same threat that led to tragedy for her mother?

As heir to a dukedom, Justin is no stranger to balancing responsibilities. When the matters of his estate force him far from Brook, the distance between them reveals that their friendship has grown into something much more. But how can their very different loyalties and responsibilities ever come together?

And then for a second time, the heiress of Whitby Park is stolen away because of the very rare treasure in her possession--and those who can save her still aren't sure whom to trust.

"Roseanna M. White presents a common historical situation in The Lost Heiress, infusing the plot with vigor through the use of strong evocative passages and detailed characterization. . . . Understated and precise, every word establishes a sense of calm purpose."
Foreword Reviews

"White's latest is a complex series of twists, turns and excitement. The cast of characters seems quite daunting at first, but the payoff in the end is well worth the effort. Readers who are fans of Downton Abbey will love the scenes divided between the upper crust and the downstairs staff and the interplay between those two very different worlds."
RT Book Reviews

"Set in 1910, White's historical series debut provides all the romance and intrigue that her fans have come to love. Enchanting characters and romantic intensity create the perfect mood for this fresh twist on the Cinderella story. The Edwardian period depicted is certain to draw in Downton Abbey fans."
Library Journal

"The Lost Heiress", by author Roseanna M. White is a great combination of mystery , romance and family. Brook Evans feels like she is always trying to find something but is never able to. She has a friend named Justin who thinks he has found out something really exciting about her. He thinks that she is really a person who has been missing and may in fact be an heiress from far away. Brook decides to go and try to find out if it was true. She is surprised that they really seem to believe her. But, all is not good, it begins to feel as if her mother's mysterious death might be putting her in some kind of danger too. Justin is heir to a dukedom and he is starting to realize that he cares for Brook. But even with Brook feeling the same way will that be enough to save her. Will they be able to have any kind of future? I enjoyed this story and I give the book a 4/5. I was given this book by Bethany House for a review and these are all my opinions.
Posted by 3 Partners in Shopping at 10:21 PM