Chaos has taken over, wreaking havoc not only across the globe but also throughout Heaven and Hell. The next apocalyptic seals have been breached, and the leaders of the ethereal realms are paying the price. With tensions high and defenses at an all-time low, Polly, Lenny, and Drew continue to hunt down the evil behind it all. Millennia-old secrets rise to the surface, testing friendships and pushing loyalties to their breaking points.


With the clock ticking and uncertainty in the air, will enough time remain to unravel a curse that the darkest of forces have Cast in Fire?


Polly’s fist smacked into the demon’s nose with a loud crunch. “What did you do?”


“Nothing, I swear! I had nothing to do with the angelite or the djinn escaping, honest, Apollyon.” Frank backed his large self up against the break room wall trying to escape the angry Knight.


“I have a hard time believing that, since the hellhound who just tracked your ass confirms you as being in the room where someone killed my prisoner.”


As if on cue, the massive beast growled at Frank from behind Polly, its huge face covered in thick tufts of oily, black fur. The dog’s eyes glowed a shade brighter in its anger and flames licked out of his orbital cavity. His giant, razor sharp teeth and thick, talon-like claws were sharp enough to rip into any type of prey. The hellhound’s skin was as hard as stone and its breath reeked of sulfur. Its growl was so loud it rattled Frank’s chest and his terror only served to feed the beast.


“I swear I had nothing to do with that. I went looking for you and found your door open. The djinn was already dead, honest. When I saw he’d ingested angelite I got the hell up out of there and grabbed a cup of coffee.” Blood flowed in light rivulets down either side of the goat-like demon’s ruined nose.


He looked wistfully at the pieces of his broken mug on the floor. The little orange kitten hanging from the tree was still visible though the rest of the mug was pretty smashed up. Its message, “Hang in there,” was lost forever in a mess of ceramic shards.


“Tell me the truth, Frank, or I’ll let Shuck here eat you for lunch.” Polly growled and pointed at the hellhound, who gave a light roar.


“Did you see anyone enter or leave my office when you came?”


“I saw Lucy leave your office before I got there. I called a hello but she just walked away.”


“Dammit, Frank, that wasn’t Lucy. I saw her before I left my office to talk to Bis. She was heading for her own office.”


“She could have doubled back.”


“No, she was already in her office moments after I discovered the djinn dead. That’s good, though, it tells me whoever is smuggling the angelite in can shapeshift.”


“I mean, uh, thanks, Polly.” The big demon grinned sheepishly and walked to the counter for paper towels. He grabbed a few and used them to clean up the blood from his mangled sniffer.


“Don’t forget to clean up the mug when you’re done.”


Polly conjured up a full slab of ribs and presented it to the hellhound. “Here you go, Shuck. Who’s a good boy? Who’s a good ol’ big boy?”


The giant black stump of a tail began wagging and the hound dug into the ribs with a lusty appetite. When it was finished the hellhound wiped its sauce covered muzzle on Polly’s leg and she laughed and scratched his ears.


“Frank, I want you to look into the angelite.” When the demon started to speak Polly interrupted him, “I know you’ve got a few tortures on your plate today but I want you digging into this.”


“Why me?” Frank gave a sigh as he dropped the remains of his second favorite mug in the trash. Polly felt bad for the poor fellow; that was the third mug of his that had been broken that month.


“Because if you ask, they’ll wonder if you saw the true form of whomever it was that killed my prisoner.”


“I hate being bait,” Frank whined.


“You owe me for this, Polly. Not just a new kitty mug, though you owe me that too, but I want a vacation after this. Three weeks, somewhere cold, maybe even frozen.”


“You help me find my dirty double-crossing demons and you have a ticket to anywhere you want, Frankie.”


“Apollyon, you assaulted me in the break room and broke my favorite mug. I am feeling a little violated by you right now. If I can be honest here….” At her shrug he continued, “You and your friends have been awful hard on me as of late and I really don’t feel comfortable with it.”


“You mean the shifter and succubus you tried to torture?” Polly snorted incredulously.


“I wasn’t trying to torture them. I was just trying to get to know the succubus a bit better and they attacked me, honest!”


“Frank, did you put your hands on Drew without her permission?”


“No buts. You didn’t like that they fought back, am I right?”


“Well, I expected them to fight back, but I didn’t expect them to gang up on me and beat me up. I felt so violated.”


“Frank, when you attack a woman, you ought to expect they’ll fight back. Whining that they did, and that they kicked your demon ass, is not going to help your cause. You got what you deserved, buddy.” Polly conjured up a video monitor and showed him the whole attack.


“Oh, I guess I probably seemed threatening to them. I promise I wasn’t really going to hurt them.”


“Doesn’t matter, Frank. Your intentions, good or bad, no longer matter when you touch someone without their consent.”


“Please do. Hey, when you’re torturing a soul go nuts, do whatever you want, that’s why they’re here. Be safe in the knowledge that they deserve the torture. If you’re in the break room, those rules do not apply. Here, you use the same decorum you would show in Lucy’s presence.”


“Lucifer is the Queen of Hell. Those were lowly half-breeds.”


“Doesn’t matter. Guests of the realm are to be treated as royalty, capice?”


“Good boy.” Polly conjured up a blue mug with a picture of a grumpy looking cat and text that read “Just say no…to Mondays.”


“Aw, I love it! Thanks, Polly.” Frank hugged his new mug tightly.


“I will! I love my new mug.” When Polly looked up she saw he was already washing it in the sink and eyeing the coffee pot excitedly while softly humming “Let it Go … Let it Go….”


She smiled and said, “Later, make sure you behave yourself.”


Frank held up a sudsy hand and waved in response. Polly left the break room shaking her head. For being the best torture master Hell had, Frank sure was a softie about his kitten mugs. 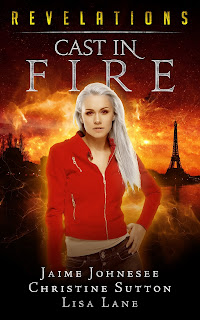 
Jaime Johnesee lives in Michigan with her husband and two sons. She spent fourteen years as a zookeeper before shifting her focus to writing full time. Widely known for her bestselling horror comedy series, Bob the Zombie, she is currently coauthoring the paranormal horror series, Revelations, for Devil Dog Press as well as working on her Shifters series.


You can find out more about Jaime Johnesee at her website: https://www.JaimeJohnesee.com

Lisa Lane has been writing dark speculative fiction for over twenty years. She has ten published novels and dozens of published short stories written under genre-specific pseudonyms. She is married to editor Thomas B. Lane, Jr. and currently resides in the outskirts of Sin City.


Christine Sutton is the author of more than fifteen short stories, novellas and novels. While she tends to cross genres within horror, she is always passionate about scaring the hell out of you.


Her passion would have to be serial killer fiction, but she also loves ghosts, ghouls, demons and monsters of all types. Christine's work ranges from modern day fairy tales to demonic soul eaters to ghostly children that just want to play. Her writing has been called passionate, realistic, gritty, fun, enthralling and tons of other cool adjectives.


You too can pick up some of Christine's work and come up with some cool adjectives of your own. It won't be hard. I promise.


Twitter: @csuttonauthor
Posted by 3 Partners in Shopping at 12:06 AM