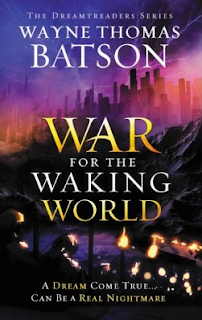 The War for the Waking World (Thomas Nelson, October 2015)
Would you be willing to fight for your dreams?
Fifteen-year-old Archer Keaton has the ability to enter and explore his dreams. He is a Dreamtreader, one of three selected from each generation. Their mission: to protect the waking world from the Nightmare Lord who dwells beyond the Slumber Gate. But as Archer’s dreams become more dangerous and threatening, so too does his waking life.
In this fast-paced conclusion to the exciting fantasy trilogy, the dream world and the waking world bleed into each other when a rift is formed between the two. People in the real world suddenly find their waking lives resemble their wildest dreams. Now it’s up to Archer and his fellow Dreamtreaders to race to reverse the rift before too much damage is done and to battle Archer’s ex-best friend, Kara, who sits on the throne of the Nightmare Lord. Kara is building an army of her own. Will Archer be strong enough to stand against her?
Learn more and purchase a copy.

Wayne Thomas Batson is an American writer. He has been married to his wife, Mary Lu, for seventeen years and has four children. He currently works as a teacher at Folly Quarter Middle School teaching sixth grade English language arts and is the youngest of four children. His most recent series, "Dreamtreaders" published by Thomas Nelson Inc (2014), is a modern-day paranormal YA adventure dealing with the subject of dreams.

Wow, "War For the Waking World" by author Wayne Thomas Batson is a book with a very interesting idea. This is a story about a Dreamtreader named Archer Keaton. He is a 15 year old boy, There are only 3 for each time in the world. There is a Nightmare Lord and it is their job to keep all of the waking world safe from him. This is the last book in a really great trilogy. What will happen if the two worlds start to come together? Archer and the other 2 Dreamtreaders have to save the rest of the world before it is too late. Archer must also fight Kara who is assembling an army to fight. Archer and Kara used to be best friends. Will they be able to fight each other? Will Archer and others be able to save everyone else? I really liked this fantasy and I liked the ending. I give this book a 5/5. I was given this book by Litfuse Publicity Group and all of these opinions are mine.