13 Most Haunted in Massachusetts by Sam Baltrusis Book Blitz

13 Most Haunted in Massachusetts


Paranormal journalist and "Ghosts of Boston" author Sam Baltrusis has traveled all over Massachusetts in search of New England's 13 most haunted. From the oldest continuously operating hotel the Omni Parker House in Boston to the beautiful but extremely active Haunted Victorian in Gardner, Baltrusis breathes new life into the long departed. 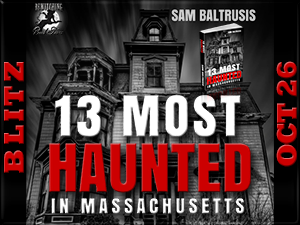 The 13 Most Haunted in Massachusetts


“I was told by intuitives that the spirits in the house have something very important to tell me. Does that sound crazy?”


A woman named Mattie Cornwell summoned me to this house. She’s been dead for more than a century.


In the recurring dream, I see her silhouette from a gold-colored Victorian’s second floor. She’s upset. I can see an outline of what looks like a tightly wound bun in her hair. Her clothing is late 1800s school marm and she looks much older than her actual age. I would guess she’s in her 20s. The woman is a caretaker of sorts and is protecting the home from forces out of her control. She’s losing the battle and is calling me from the light for help.


Think Mary Poppins but without the spoonful of sugar. In my dream, she’s serving up daggers.


Something horrible happened in that house and she is begging the living to help her. I could hear her singing a folk song from the window. She was throwing books and papers at me from the home’s second floor. She’s saying what I remember as “sefnock” over and over at a shadowy man who is in the room with her. I’m terrified.


My dream of Mattie was in 2011. I was writing what would become my first book, Ghosts of Boston: Haunts of the Hub. I initially thought she was the “stay behind” spirit, the seamstress I lovingly called “scissor sister,” who haunted my home in Somerville’s Davis Square.


The dream was prophetic in a way. I didn’t make a connection to the haunted S.K. Pierce Victorian Mansion in Gardner until I saw a photo of the structure posted online in late 2014. My friends Rachel Hoffman and Tina Storer from Paranormal Xpeditions were investigating the location and I had a severe reaction when I saw a post from the Victorian structure because I’d seen it repeatedly in my dreams.


I swore I would never go there. But here I am—going to the very spot where Mattie Cornwell once lived. What was I thinking?


A friend who has intuitive abilities warned me about the shadow figure in my dreams. "That woman will suck the air out of you,” she said during an online chat. “No. I mean it. Like sitting on your chest. You won’t be able to inhale." She said the spirit's name is Maddie or Matilda.


I found out recently from fellow author Joni Mayhan that the former nanny at the haunted S.K. Pierce Victorian was named Mattie Cornwell. Her spirit has been in the house since the late 1800s. “Petite, with long dark hair that she wore in a bun, she once cared for the Pierce children,” wrote Mayhan in Bones In The Basement. “Chores were scheduled at specific times, and the children were taught to behave. Even though she was long dead, she remained the protector of the house, keeping it safe from trespassers and ensuring the other resident ghosts behaved themselves.”


Mayhan said Cornwell had crossed over and is no longer bound to the haunted Victorian. “She was the Pierce family's nanny. Mattie wasn't negative though. She was the gatekeeper and peacekeeper there, but she was inadvertently crossed over during a house cleansing in 2011,” Mayhan told me. “After she left, the really nasty ones came in. There are a few nasty female entities there, but Mattie isn't one of them.”


According to Mayhan’s Bones In The Basement, Cornwell died young. “She was born in 1859 in Nova Scotia, Canada. She was 21 when she came to work for the Pierce family as a servant in the house. Her primary focus was caring for the Pierce children. She was firm but loving with the children, keeping them mindful of their manners and helping them grow into the influential men they would one day become,” wrote Mayhan. “Later research would show that Mattie died at the young age of twenty-five from an acute inflammation of the hip just two years after getting married. Her tragedy would be just one among many at the Victorian mansion. It was as if the house collected them, like some people collected old coins.”


Rachel Hoffman, my friend from the all-female investigation team Paranormal Xpeditions, said I should be wary about the haunted house in Gardner. “You might not be able to walk in,” explained Hoffman. “I swear it's a pressure cooker. You will feel it as soon as you see it. Look into the top window and tell me what you see. Then I'll tell you.”


Hoffman, who was featured in a taped investigation at the mansion with Tina Storer and her sister, Danielle Medina, said the experience still haunts her. She believes the location is a portal, a vortex of sorts to the spirit world that allows both good and bad spirits to cross over. “There’s more than one story there,” she said. “There’s a story for every step you take.”


When PXP was investigating the mansion in late 2014, I had a strong psychic feeling that one of the investigators, Tina Storer, wasn’t safe. I sent a message to the PXP team warning them. Hoffman told me later that Storer had to be escorted out of the building because she couldn’t breath. It was like the spirits were taking the air out of her lungs.


“Tina had issues where the man was burned,” Hoffman told me. “At one point, she did feel protected. But it was so intense. Our temp gage was 66.6.”


Medina, Hoffman’s sister, was pregnant during the investigation and the group uncovered an electromagnetic voice phenomenon, or EVP, in the nursery. “We got my pregnant sister bending over to pick up a baby in the nursery and the ovilus said ‘mama,’” explained Hoffman. “My sister is a skeptic so this was profound.”


Hoffman and the PXP team smudged the location with a cleansing ritual involving coffin nails and sweet grass. The usual ceremony with the old standby sage simply didn’t work. “When closing out a paranormal investigation, we sometimes use coffin nails,” Hoffman explained. “I found our container used in the haunted Victorian Mansion with the bottom half of the glass jar totally gone. I wouldn't be surprised to find the nails we pounded in the ground embedded in a tree. Renovations and hands switching is stirring up the activity majorly.”


Rob Conti, the ringleader behind the New Jersey-based Dark Carnival and a dentist during the day, said he always wanted to own a standalone haunted attraction. The S.K. Pierce mansion was literally ripped from his childhood fantasies. He says the fact that the 7,000-square-foot mansion located at 4 Broadway in Gardner is “certified haunted” is an added bonus.


“Since I was 15, I always wanted a single-family haunted house,” he said. “I always had a picture in my mind of what that attraction would look like. As I got older, I tried to make this vision a reality but there were regulations in New Jersey that prohibited it.”


Conti, who actually didn’t visit the Victorian until the day he closed the sale on the building, said a friend posted the real estate listing for the mansion on his Facebook page. “As soon as I saw it, I knew the image of the house was the image I had in my head for the past 25 years.”


The new owner said he will hash out the details after the year-long renovations, but he plans to rent out the unit for 11 months of the year and will turn the space into a haunted attraction every October. Since purchasing what paranormal experts believe is the most haunted house in Massachusetts, Conti said he has been contacted by all sorts of people.


Conti also had a paranormal experience after walking into the structure’s dining room, the same spot investigators believe is a portal. “I started feeling dizzy and had to be escorted out of the building,” he explained. Also, the Dark Carnival owner said a contractor, who didn’t know the building’s haunted history, told him that somebody else was on the second floor when there was no one else in the house.


“I was also told by intuitives that the spirits in the house have something very important to tell me,” Conti continued. “Does that sound crazy?”


As I stand gazing at the house that haunted my dreams for years, I replay the dream of the woman I believe to be Mattie Cornwell looking out of the second-floor window. As I walk closer to my nightmare, I’m shivering in the beauty and the madness of the moment. I think about the word “sefnock” that she chanted over and over. I hit my head as I quickly jump into the car near the S.K. Pierce mansion’s driveway searching for a notepad. I write the mystery word out phonetically.


Then I had an epiphany. I gasped for air. The woman’s cryptic, post-mortem plea is backwards. She’s demanding that the shadow figure … confess.


Cars are driving by and passengers are yelling things at me like “there’s someone behind you” and “this place is really, really haunted.” My cellphone starts to flip out and, mysteriously, seems to have a mind of its own, calling random people from my contact list. I hear what sounds like a disembodied male voice whispering in my ear: “Get out of here.”


I look again at the second-floor window, expecting to see Mattie Cornwell, the spirit who mistakenly crossed to the light years ago. Instead, I see a black bird, possibly a crow or a dark-colored pigeon, perched on the ledge. The white-lace curtains move as if someone is peering out of the window.


Sam Baltrusis, author of Ghosts of Boston: Haunts of the Hub and Ghosts of Salem: Haunts of the Witch City, is the former editor-in-chief of Spare Change News and teaches journalism classes at Malden Access TV (MATV). He has been featured as Boston's paranormal expert on the Biography Channel's Haunted Encounters and Paranormal State's Ryan Buell's Paranormal Insider Radio. As a side gig, Baltrusis moonlights as a guide and launched the successful ghost tours, Boston Haunts and Cambridge Haunts. In October 2014, he spearheaded a boat tour called Haunted Boston Harbor. Baltrusis is also a sought-after lecturer who speaks at dozens of paranormal-related events scattered throughout New England. In the past, he's worked for VH1, MTV.com, Newsweek, ABC Radio and as a regional stringer for The New York Times.