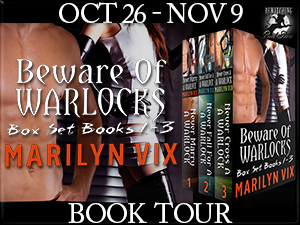 Can two warlocks be too many?


Yes, if one happens to be your ex-husband trying to kill you for a witch divorce.


The other, a sexy Aussie that makes you forget all the rest.


Catherine walks in on her husband in bed with her best friend. What is a woman to do? It helps that she is a witch. Unfortunately, so is her husband. Before you can say spell battle, Catherine high tails it up the coast of California to clear her head. Lucky for her, she finds an Aussie hitchhiker. She's going to have to face her husband in the awaiting spell battle. Can she have a little fun with her newfound boy toy, or will he get scorched in the foreplay?


But nothing turns out as you think. Catherine runs to Las Vegas with Jeff finding her feelings for him the saving grace from the dangers of Las Vegas. Confused between her husband cheating and a new addition to her heart, she will have to choose between the two of them. Will she marry either, or end it all in a spell battle that will bring Las Vegas to its knees. Only time will tell. No one knows the mind of a witch better than herself. Unless, she falls in love.


Never Fall For A Warlock


Never Fall For A Warlock:


Excerpt from beginning of Never Marry A Warlock:


My husband’s arms were wrapped around her naked body. The blankets were strewn and interwoven between their legs. He was spooning her with his biceps draped over her. I stood in the doorway taking in the scene of my husband and my best friend. It was the end of the world, at least for me. But I wasn’t going to take it lying down. I should have known better than to have married a warlock.


I hit him with a force spell that knocked him up against the headboard. He fell back down and braced his hands out to catch his fall. Cassandra scrambled out of the bed, dragging the silk comforter with her. Bitch. She better get out of my way. She was next.


Rich was naked as he sat up to look at me. Normally, the abs-flash trick would work. But not now. I was too pissed off. I knew what spells he used to look like that. It was easy to fool a mortal and ex-best friend on the floor. But not me. Thing is, we were too evenly matched. I think that was the problem.


He threw a counter spell that lanced light through my arm, digging into the flesh as it tried to anchor and link me to him. I flicked out a removal spell that broke the connection, laced my hands together, and hit him with a burst of everything I had. He went flying backward, through the window into the pool. It was satisfying to watch. He tried to rise up and hover toward me, but I knocked him back in the water with another force spell.


He yelled from the pool. His wavy, brown hair trenched with water. “Baby, we can talk it out. It’s just a moment of weakness. You’ve had them with mortals.”


I’d drown him if he couldn’t breathe water. Blowing up the six-million-dollar house probably wouldn’t kill him either. Like I said, never marry a warlock. I shot another burst of energy, creating a field that pushed him under. He swam back up and came to the side, with both chiseled arms on the edge of the pool. His brown eyes tried to melt my insides. I wasn’t going to let him win again.


I walked through the window ledge, broken glass crackling under my heels. “It’s over Rich. Just over. I’m done with playing the games, or sharing you with the next mortal you pick up. Really, when I said my vows, it was forsaking everyone. Including mortals.”


I blasted him into the pool again. Rich came up from the bottom, laughing. He swam back to the side and got out. He walked toward me with glistening, rock-hard muscles. I fought down the attraction, along with the writhing anger. Maybe blowing him up was too good for him. Slow, painful death. Maybe.


Marilyn Vix writes paranormal romances for women that want to forget the real world and find their new alpha boyfriend made to order from their deepest desires. She enjoys the characters that just don't fit in. From witches to time traveling researchers, she is letting her imagination soar to explore new worlds and write all the details down. Marilyn has traveled to Paris, London, Sydney, Las Vegas and Munich. She loves to include these in her settings. Best of all is letting her readers enjoy them through the perspective of a character. She currently lives in Northern California with her husband and cat. The cat, of course, is the center of attention.