The Challenge by Kim Iverson Headlee Virtual Tour and Giveaway 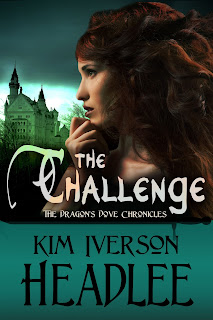 
The gauntlet is thrown. One must die. Refusal is not an option.

Arthur the High King of Breatein has fallen captive of a longtime enemy, the Saxon warrior-princess Camilla, who lusts to avenge the death of her betrothed at Gyan’s hands and will stop at nothing, even the black arts, to achieve her goal. Because Gyan and Arthur have grown estranged, she fears that Arthur may side with Camilla and make her his new queen.

To meet Camilla’s challenge, Gyan must face all her demons—public as well as private. 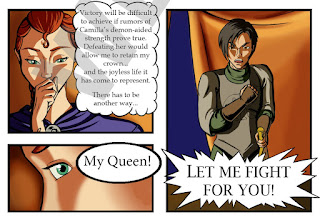 
The guard drew a long breath. “Your Majesty, it is time.”


Time to face all my demons, private as well as public.


At her nod, he returned to his post outside—a mite reluctantly, she observed.


“Any last advice?” she asked Merlin at the tent’s entrance. She barked a mirthless laugh. “How does one fight a demon?”


“You must not forget your shield.”


She felt her eyebrows rise. “You know I am no novice warrior.”


“I am not talking of wood and metal, Your Majesty.”


Kim Headlee lives on a farm in southwestern Virginia with her family, cats, goats, Great Pyrenees goat guards, and assorted wildlife. People and creatures come and go, but the cave and the 250-year-old house ruins—the latter having been occupied as recently as the mid-twentieth century—seem to be sticking around for a while yet.


Kim is a Seattle native and a direct descendent of twentieth-century Russian nobility. Her grandmother was a childhood friend of the doomed Grand Duchess Anastasia, and the romantic yet tragic story of how Babushka escaped Communist Russia with the aid of her American husband will most certainly one day fuel one of Kim’s novels. Another novel in the queue will involve her husband’s ancestor, the seventh-century proto-Viking king of the Swedish colony in Russia.


For the time being, however, Kim has plenty of work to do in creating her projected 8-book Arthurian series, The Dragon’s Dove Chronicles, and other novels clamoring for attention. She has been a published novelist since 1999, beginning with the original editions of Dawnflight (Sonnet Books, Simon & Schuster) and Liberty (writing as Kimberly Iverson, HQN Books, Harlequin).


This book will be offered FREE on Kindle Oct 27-28


Kim will be awarding an autographed print copy of DAWNFLIGHT to a randomly drawn winner (US Only) via rafflecopter during the tour,

: a Rafflecopter giveaway
Posted by 3 Partners in Shopping at 12:36 AM