Unleashed by Shadow by Nancy Gideon Book Blitz and Giveaway 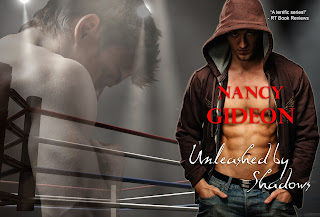 
Burdened by the weight of his secrets and his father’s sins, the need for redemption pulls Cale Terriot from his duty to his clan and the arms of his new mate into deadly intrigues in a rival territory. His dangerous masquerade in a high-stakes Shifter fight club is about to be exposed to those who would show no mercy – if he can survive in the ring.


How to protect a prince turned king made pawn?


Fearing she’ll lose her soulmate to the darkness he carries inside, Kendra Terriot, newly made queen in the Shape-shifter House of Terriot, must provide him with an heir in order to save his life . . . and his soul. But first she must risk all to coax him back from the edge of violence inherited with his crown.


Can her love tear him from an unbreakable vow that can only end in death?


“Every delicious word Nancy Gideon puts on the page exhilarates with a sensuous ferocity. Hopelessly addicted.”


Excerpt from UNLEASHED BY SHADOWS . . .Cale


He feared no man, no foe, no obstacle or challenge. He’d learned to stand his ground and take it without a wince while growing up with the most to prove in the House of Terriot. He’d been schooled beneath the heavy heel and meaty fists of Bram Terriot, bearing the marks of those lessons scored into his skin and once tender psyche. He understood intimidation better than he did compassion. Had once indulged in every savagery Lee now expected from him. Would have become a brutal, heartless monster walking the same path his father followed had it not been for the two things that called to his latent decency: The brothers who’d fearlessly stood beside him and the female brave enough to believe his claims.


He owed them. He owed his family prosperous lives without fear and subjugation, where pride wasn’t measured in cruelties. He owed the woman he loved the fulfillment of promises made by a starry-eyed boy. He owed them a future in which they bowed to no one and had no reason to expect the worse from one another. And to achieve those things, all he had to do was right the wrongs of the man who’d desecrated the crown he now represented.


With a weary laugh, Cale closed his eyes.


His debt. His burden. His to carry and complete alone. No whining about the costs to body, heart or soul. No crying over what couldn’t be changed, repaid or repaired. No shirking from sacrifices sure to cost more than he’d ever thought to wager. The blood on his hands would never come clean. There was no forgiveness for his sins—the sins of the father now those of the son. He was lost but he wouldn’t drag those he loved and respected down with him. Not while he still had strength and breath and opportunity.


He couldn’t save his people hiding on their mountain top. He couldn’t purge his guilt without a willingness to surrender his life.


Nancy Gideon is the award winning author of over 58 romances ranging from historical, regency and series contemporary suspense to dark paranormal, with a couple of horror screenplays tossed into the mix, and is currently testing the “Hybrid author” waters. She works full time as a legal assistant in Southwestern Michigan, and when not at the keyboard, feeds a Netflix addiction along with all things fur, fin and fowl. She’s also written under the pen names Dana Ransom, Rosalyn West and Lauren Giddings, and is a member of the Mid-Michigan, PAN and FF&P Chapters of RWA.