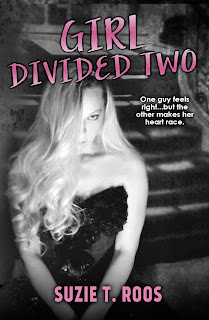 
Life was supposed to get easier…


At least that’s what Tatum had hoped. New school year, great boyfriend…and things with her and Zach were supposed to be wonderful. Fairy tale wonderful.


Zach’s overbearing family controls his every move—and worse, they want to control Tatum. Now Zach is pressuring her to ‘speak for him’, which means she’ll not only be committed to him but also his mob family. Where’s the guy she fell in love with? To make matters worse, her friends introduce her to Nigel, the new guy who is more tempting than Tatum wishes.


So which will Tatum give in to … coercion or temptation?


AUTHOR GUEST POST,  We at 3 Partners in Shopping, Nana, Mommy, & Sissy, Too! are very happy that we have a fantastic author with us today.  Suzie T. Roos
First, thank you, 3 Partners in Shopping, Nana, Mommy & Sissy Too, for hosting me!
There is one aspect I haven’t touched on at all with the release of my Spoken For trilogy—what it was like growing up in the 80’s and early 90’s.
I’m a child of the 70’s, but was a teenager in the 80’s/90’s. To me, it doesn’t seem that long ago. Yet the speed at which technology has advanced since then—and the effects on everyday life—is utterly amazing.
Being a teenager in the 80’s was so much easier to sneak around and never get caught! (That is until you did something really stupid which had longer lasting effects.) No-one had a cell phone. Of course, we called them “car phones” at first and then “mobile phones.” They were outrageously expensive, and gigantic. Once 1989 came around, they became smaller and more portable, but still really expensive. Back then, even caller ID on the “land line” (although no-one called it that; it was the phone line) was new and expensive. Those little caller ID machines were outrageous.
In addition, fewer teens had their own car. If they did, it was some small crappy jalopy. In the Spoken For trilogy, I tried to stay true to that aspect for the most part. However, Zach and Nigel both come from families that have more money than Tatum’s middle class family, and so they have reasonably nice cars.
If you were a teen in the 80’s, were you one of the lucky ones to have your own car? If so, what did you have?
If you are a teen today, do you have a car? What kind of car? Do teens today even care about cars now that you have smartphones which can “take” you anywhere?
Back then, it also seemed as if we connected with music more. It was a more important part of our lives, whereas now it seems like just another background distraction. Music is so much cheaper and easier to access nowadays, but, as a result, it seems less valued and more ephemeral.
Of course, we had our heartthrobs with their disposable songs, but there were a number of artists who had staying power and to whom I felt so connected. They understood love . . . heartache . . . betrayal.
Is it any wonder that Taylor Swift named her most recent album 1989 to try and recapture some of that feeling?
If you’re a teen, what artists or songs speak to you? And why?
When I was a teen and was first dating my now husband, one of our songs was, “Wouldn’t It Be Nice” by the Beach Boys (of course, that song dates from 1966!). Listen to the lyrics if you don’t know them. My boyfriend (now husband) and I couldn’t wait to be able to go to sleep and wake up together . . . kiss whenever we wanted. We just wanted to be able to say goodnight, but never leave each other.


Life was supposed to get easier for Tatum Duncan after she started dating Zach Bertano, but when Zach’s overbearing family starts trying to control her, Tatum finds herself pressured to “speak for” Zach. Worse, new guy Nigel is proving to be more tempting than Tatum wishes. One guy feels right … but the other makes her heart race! Which will Tatum give in to?


Find out in GIRL DIVIDED TWO, the newest installment in Suzie T. Roos’s exciting series that blends edgy with a splash of innocence and a smidgen of humor, releasing October 20, 2015.


Suzie T. Roos is from, and has settled in, St. Louis with her husband, two children and a number of foster pets at any given time.


She and her husband have lived everywhere from Philadelphia, PA to out West in Santa Monica, CA. They’re thankful they could expose their children to different American lifestyles and cultures.


Besides writing, Suzie’s hobbies include movies, traveling, and especially concert going with her husband and friends.


She’s always been an animal lover and animal rights advocate. She is certified by FEMA in IS-00011.a Animal in Disasters: Community Planning. She’s also an active volunteer at the Humane Society of Missouri.


Suzie is offering visitors three awesome prizes during her Girl Divided Two Tour event! One (1) Grand Prize winner will receive a $25 Amazon Gift Card, and two (2) Runners-up will receive an eBook copy of Girl Spoken For in the format of their choice. To enter, please fill out the Rafflecopter form below: :