Into Darkness by Hayley Barrett Blog Tour and Giveaway 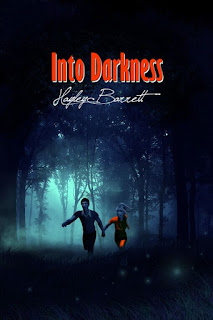 She is however, supposed to be the daughter of the wealthiest, most influential man in the post-apocalyptic New Zealand city of New Phoenix.

But apparently, she isn’t.

Shell-shocked and struggling to understand why she is no longer a member of the city’s ruling family, Alexandra is torn from her privileged life by the churlish young guard, Will Metcalfe, and forced to trek for three weeks through deadly wilderness to her place of imprisonment. Her journey with Will is a constant battle for survival, where she is never sure who is the real enemy. It is also journey into the truth about the safe and lavish world from which she has been cast. Through Will, she learns of a mutant race called Drifters living in the wilderness who are being preyed upon by New Phoenix’s guards—Drifter’s blood being a life saving cure-all elixir for the city’s inhabitants.

As Alex struggles to cope with her new life in Elder Grey, an act of friendship ends in tragedy. When someone she thought was an enemy pulls her from her despair, Alex discovers that old friends cannot be trusted, prejudice is another word for fear, and trust, not blood ties, make a family.

About the Author
Hayley Barrett began writing in the aftermath of the devastating Christchurch earthquakes of 2010 and 2011 as a way of escaping from the ongoing terror of the natural disaster. Not totally happy with her efforts, in 2012 she commenced a novel writing course. Into Darkness, her first novel, is the result of the course and two years hard work.

Hayley lives in Rolleston, ten minutes south of Christchurch, New Zealand, with her husband and three children. When she isn’t driving her kids to their sports practices, games and other after school activities, she enjoys playing squash, relaxing in the sun and reading. Most days she wishes there were more hours available to spend writing.


YA Bound Book Tours
Posted by 3 Partners in Shopping at 12:16 AM