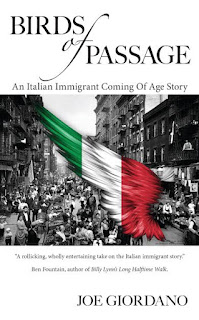 Book Description for Birds of Passage:

What turns the gentle mean and the mean brutal? The thirst for wealth? The demand for respect? Vying for a woman? Birds of Passage
recalls the Italian immigration experience at the turn of the
twentieth-century when New York’s streets were paved with violence and
disappointment.

Leonardo
Robustelli leaves Naples in 1905 to seek his fortune. Carlo Mazzi
committed murder and escaped. Azzura Medina is an American of Italian
parents. She’s ambitious but strictly controlled by her mother. Leonardo
and Carlo vie for her affection.

Kirkus review of Birds of Passage
"With Birds of Passage,
Joe Giordano delivers a rollicking, wholly entertaining take on the
Italian immigrant story.  His rich cast of characters arrives seeking
the usual: Money, honor, love, respect, a decent shot at the pursuit of
happiness.  But things get complicated fast as they plunge into the
rough-and-tumble world of rackets, scams, and politics of early
20th-century New York City.  Giordano serves up a thick, satisfying
slice of the entire era in all its raw and brutal glory."
Ben Fountain, author of Billy Lynn’s Long Halftime Walk, soon to be a major motion picture directed by Ang Lee.
The Kindle copy of Birds of Passage will be free to download  for five days starting the day after the end of this virtual tour (Saturday, November 7th through Wednesday, November 11th)

3 Partners in Shopping, Nana, Mommy, &, Sissy, Too!   would like to thank author Joe Giordano for sharing his thgoughts with us today


Birds of Passage, an Italian Immigrant Coming of Age Story


My father and grandparents all emigrated from Naples to New York. As with the character, Guido Basso in Birds of Passage, both my grandfathers were ragmen. Their labor was dirty and backbreaking, but they were their own padrone. My father was the last immigrant in my family. He acquired just a seventh-grade education before he set out to work. Unemployed for a long period during the Great Depression, he found a job in a warehouse. Working rapidly to impress the boss, he reached up for a box atop which a vase had been left. The glass knickknack slipped and shattered onto the concrete floor. My father was fired on the spot. Not deterred, he started his own business.


My mother was one of five daughters employed at home doing piece work so her family could earn enough money to leave the tenement. Eventually her family purchased a home in Brooklyn.


When I was growing up, if my father and I passed a man doing hard manual labor, my father would say to me, “See that? Go to school.”


Many Italian-Americans stand upon the shoulders of those intrepid enough to try and make a better life in a new country. Birds of Passage is not a biography about my family, but I’m old enough to have known people who were born in the nineteenth century. In the novel I tried to capture how Italian immigrants of past generations thought and acted. 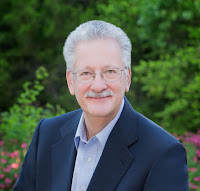 Joe
Giordano was born in Brooklyn. His father and grandparents immigrated
to New York from Naples. Joe and his wife, Jane have lived in Greece,
Brazil, Belgium and the Netherlands. They now live in Texas with their
shih tzu Sophia. Joe's stories have appeared in more than sixty
magazines including Bartleby Snopes, The Newfound Journal, and The
Summerset Review.