Faith of the Highlander 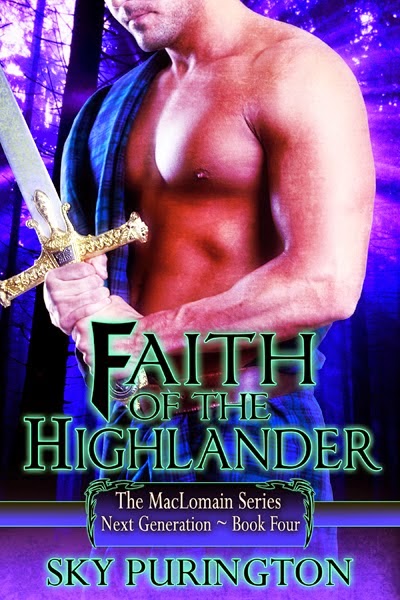 
Like her cousins, Sheila wears a Claddagh ring meant to connect her Broun lineage with the MacLomain clan. Already having witnessed the strife ravaging the medieval Scottish highlands she’s eager to once more be thrust back in time…even if it’s into the arms of the enemy.


Imprisoned fourteen winters and now first-in-command of the enemy’s army, Grant MacLomain must find a way to save all those he cares for. Though under the watchful eye of his master and chieftain, Keir Hamilton, he unleashes his plan the moment he connects with a lass from the future.


Through hardship, forgiveness and even acceptance, Grant and Sheila struggle to push past their abused hearts and the war that divides them in, Faith of the Highlander.


Sheila started to tremble when he broke free from the last of whatever or whoever had imprisoned him. A shiver raced through her and she knew.


Grant had just broken free from Keir Hamilton’s mental hold over him.


He tore off his tunic and whipped it aside. With nothing but the Hamilton’s plaid hung low on his waist, he was an impressive sight. Legs braced, arms by his side, fists clenched, he closed his eyes. Cast in the soft, flickering glow of a single sputtering torch, sweat slicked muscles rippled down his long warrior’s body. Was he praying? Long moments passed. Every one of them a lifetime as her heart thundered. Then, as if replacing one swift divine moment with another, his eyes snapped open and met hers.


Sheila made to speak but the words died on her lips when in two swift strides, he pulled her into his arms. The word ‘wee’ seemed a massive understatement when up against him. Though she was fairly tall at five foot seven, he had to be a foot taller. Lord, she felt tiny! What had been but a tremble became a harsh fiery heat that whiplashed through her body. Emotional state and sensory awareness in overdrive, she put her hands against his hard chest.


“Oh, I shouldn’t have done that,” she murmured. But she didn’t pull her hands away.


No, if anything, she pressed tighter and curled her fingers slightly. It was one thing to meet a man in your mind, another thing entirely to feel him pressed up against your body. When he tilted up her chin, her eyes slid shut. Why, she’d never know. She supposed somewhere deep inside she wasn’t ready to look too closely into his eyes.


Perhaps she was afraid of what she’d see there. Perhaps though he seemed so strong she’d see years of mental abuse flicker in his gaze. Mental abuse inflicted by Keir being twisted within his mind for so long. The very idea of it made her sick to her stomach.


But none of that mattered when she felt his warm breath whisper over her lips. Close, so very close. She could all but feel his mouth hovering over hers. Time slowed as her lips fell open. Sensation heightened. A slow burn covered her cheeks. An ever so slight throbbing began first on the sides of her neck as emotion welled. Her heart pounded so strongly that her lips pulsed, ready for the pressure, the weight of his mouth against hers. 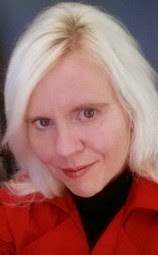 
Sky Purington is the best-selling author of eleven novels and several novellas. A New Englander born and bred, Sky was raised hearing stories of folklore, myth and legend. When combined with a love for nature, romance and time-travel, elements from the stories of her youth found release in her books.