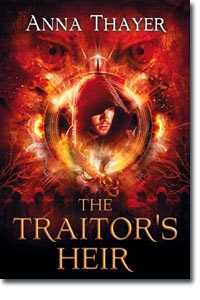 Every man has a destiny. His is to betray.
Like many from his village, young Eamon Goodhand dreamed of joining the Gauntlet, the army of the overlord Eldered. Now he is about to complete his training and swear his loyalty to Eldered and his commanders, the Hands, who uphold Eldered’s tight control of the land.
Entering into the service of the Gauntlet, Eamon’s gifts, particularly his potent Sight, quickly become valuable to his superiors and he advances to the command rank at a speed that arouses the suspicions of fellow officers.
However, Eldered’s bloody rule, and Eamon’s personal friendships, start to challenge the young soldier’s assumptions about what might be true, and worthy of service. And soon Eamon must conceal a fatal secret: he is sworn to both Eldered and to Hughan, the rightful king of the land. Yet he may not forswear the vows he has uttered in all good faith so however he serves, his name will be traitor.
As tensions and military skirmishes increase, Eamon finds himself trusted by both his masters. How can he possibly maintain his integrity, act justly to his fellow officers of the Gauntlet, and act on behalf of all the warring people of the land?
Third in series, The Broken Blade, is coming soon.


Reviews
Review   Publishers Weekly - April 28, 2014
"In Thayer’s debut novel, soldier Eamon Goodman is entangled in a power struggle between the Serpent King of the wayfarers and the Master of the River Realm. Sworn to loyalty to the Master through the Gauntlet, his armed forces, Eamon is presented with an alternative history of his master’s political ascent that forces him to reconsider his fealty when he is captured by the enemy. When he is sent back to Dunthruik, the Master’s city, he returns as a traitorous informant for the Serpent King, rising quickly through the ranks of the Gauntlet. Thayer paints Eamon as a psychologically complex character who doubts the validity of the oaths that he has sworn. Eamon finds comfort in the gratification and immediate glory for his deeds in the Gauntlet. This deeply conflicts with his moral desire to contain the violence inflicted on wayfarers and the faith needed to believe in a King whom he never sees or hears from. The first book in this trilogy offers a thrilling story fraught with uncertainty and betrayal, asking readers to consider the nature of loyalty and to reflect on the difference between thought and action."

My review;
This is the first book in this trilogy called The Knight of Eldaran. This novel was a very interesting book to read. Eamon Goodman has realized too late that he has made a huge mistake. He needs to decide who he will help, thus betraying the other that he has pledged his allegiance to. Although this may seem easy a lot of times it is not as easy as one thinks to betray another. What does loyalty really mean and what is it worth?  I give this book a 4/5. I was given this book by Kregel Publications and all opinions are my own.
Posted by 3 Partners in Shopping at 9:05 PM