This Love of Mine by Miranda Liasson Blog Tour and Giveaway 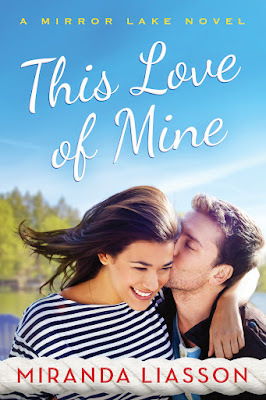 Bridal shop owner Meg Halloran spends her days making other women’s wedding dreams come true—and her nights dreaming of her childhood crush, hometown heartthrob Dr. Benjamin Rushford. After a lifetime of wearing her heart on her sleeve, she’s done waiting. Meg’s ready to find love, with or without him. Moving on feels right—until Ben pops an unexpected question.

To win the open ER position in Mirror Lake, Ben has to convince the board that he’s settled and ready to put down roots. His latest stroke of genius? Asking Meg, the local good girl, to be his pretend girlfriend. With her by his side, he’s a shoo-in for the job. But he’s in over his head because, as much as he tries to deny it, Meg tempts him. And if she learns the truth about a secret that has shadowed and shaped his life, will she ever be able to forgive him?

Ben leads Meg out onto the dance floor at a business dinner, and she’s very uncomfortable...


“Okay, baby, here we go. Hold on tight!” Ben’s face lit up with clear glee as he spun and twirled, tipped and swayed, keeping a hard and fast grip on her at all times.
He put his hands on her hips and had her mimic his own movements.
Terror threatened to freeze her limbs but she couldn’t not do . . . something. Maybe it was the fact that she felt responsible for doing whatever she could to help him get this job. But maybe it was the look of pure joy on Ben’s face that mesmerized her, made her feel giddy and . . . happy. Yes, happy in a way that made her throw herself into the dancing with reckless abandon for the first time in her life. She shook, she shimmied, she did wild and crazy things like swung and swayed and twisted. The disastrous evening seemed far away, and she was enveloped in Ben’s smile, his confident touch, and his cocky swagger as he clearly loved every move.
He drew her near and said into her ear, “Hang on for the finale, sweetheart.” Before she could respond, he pushed her until she flew away from him, then when their arms were fully outstretched and they were holding on only by their fingertips, he reeled her slowly back in until their bodies were touching, hips swaying together in a rhythm fueled by the erotic beat of the music.
As he flung her out one final time, she lost balance a little and cast out an arm to compensate. She stumbled, clutching at him to avoid falling. That was when she heard the rip.
The first sensation was relief—she could finally breathe. But that was followed quickly by terror as she realized the entire seam along the backside of her dress had ripped wide open, and the entire restaurant was about to catch a full and unobstructed view of her ass.
She spun and backed up against Ben’s body, plastering herself flat against him.
“Wow, Meggie,” Ben said as she ground into his crotch. “I never realized dancing got you so hot.”
She twisted her neck around far enough to send him the stink eye. Then she clutched at him for dear life.
“Do not move away from me,” she managed.
“Sure, no problem. Are you . . . flirting with me? Because if you are, I’m all in.” As she pushed against him, he wrapped his hands around her upper arms, a move which normally would have caused goose bumps to course up and down their lengths.
She scootched up against his chest and put her mouth near his ear. “Listen to me carefully. I’m only going to say this once. I am not flirting with you. My dress tore and . . .”
He stilled suddenly. “And what?” he asked.
“And I always wear undies. I never go anywhere without them. Except maybe for today.”
He tried pushing her away, no doubt to see the spectacle for himself, but she clung to him with the suction of an octopus.
“I didn’t think you were that kind of gal, Meggie.” His voice sounded choked.
“Panty lines are embarrassing. I had no choice.”
“Nice.”
“Just help me!”
“How do you propose I do that?”
“You’re used to dealing with crises, aren’t you? Think of something!”
“Keep smiling,” he said calmly. “And wave to all the nice people who are staring at us.”
Somehow, she managed to hold it together while he slowly backed them both off the dance floor, steering them to an opening to the kitchen.
“Hey, can we have a napkin?” he asked one of the kitchen staff. “My girlfriend just split her dress. Ouch!” He glared at Meg while holding his ribs, which she’d just elbowed. “What’d you do that for?”
“I’m flattered if you think a napkin is going to cover my ass but I need something bigger!”
“Can I change that to a tablecloth, please?” he asked as he fended off another poke. Then he turned to her. “Your ass isn’t that big, honey,” he said, biting the inside of his cheek to keep from laughing. A move which accentuated his damn dimples. Then he shrugged off his suit coat and handed it to her. “Try this.”
Eyes narrowed in her most practiced Darth Vader glare, she took the coat and tied it around her waist. “Thanks,” she managed. 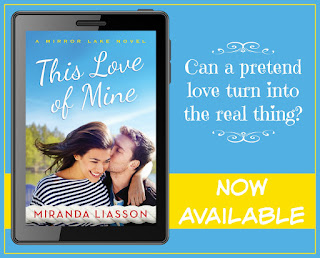 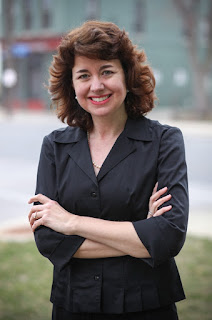 Miranda Liasson loves to write stories about courageous but flawed characters who find love despite themselves, because there’s nothing like a great love story. And if there are a few laughs along the way, even better! She’s a former Golden Heart winner who writes lighthearted contemporary romance for Montlake Publishing and also writes series romance for Entangled Publishing. She lives in the Midwest with her husband, three kids, and Posey, a rescue cat with attitude.

Miranda loves to hear from readers! Find her at mirandalisson.com, Facebook.com/MirandaLiassonAuthor or on Twitter @mirandaliasson.