In Your Dreams by John Swan Blog Tour and Giveaway


On an ancient planet within our galaxy, a dark and fearsome terror has awoken from its long slumber. Its task is to work quietly from the unseen, spreading dissent through the vulnerable territories of the free races; weakening them for its master. By a chance meeting, it comes across a young girl in the swampy and mist choked lands of Endmoor.


Her name is Mim, and the pairing of her platinum hair and violet eyes has not been seen since the Great War 1,000 years earlier; and has attracted unwanted attention. Knowing it hunts her, Mim flees and starts on a journey that takes her far across the Great Isle of Aldaya; the only landmass that now sits above the waves. 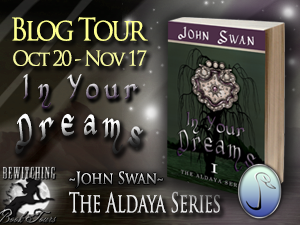 Unbeknownst to her, she is the key to unraveling the darkness that is falling over the Great Isle; an emptiness that threatens to swallow not only Aldaya, but the Sphere as well, and all its futures to come.


Her words caught in her throat and she was unable to breathe. The woman at the table was the strangest looking person she had ever seen. Her body was thin and gangly, and her pale skin stuck out jaggedly in places as if it were trying to cover too many bones. Even sitting down Mim could tell she was tall, and her thin robes were midnight black and hemmed in places with dark maroon embroidery.


Then Mim took in her face, and it was paler and more terrifying than the rest of her body.


Her cheekbones were set a little too pointy and high. The mouth was nothing more than a thin slit stretched too far across the length of her face. The nose looked as if it had been removed, shrunk, and poorly placed back on. And her eyes were ghastly and titled upwards too far, and completely black with veins around the outer parts. Their color matched the hair that came down from her dark hood, which had jagged protrusions poking out at a few points near the back.


“Oh! I didn’t smell a child,” the creature said. As her black eyes met Mim’s purple ringed with blue, she stopped. “Well, what do we have here? How strange...” She got up from the table and circled her. At full height, the creature stood at least two feet taller than Mim.“I can smell the sweet scent of youth a mile away, little piglet, yet somehow I had no idea you were here.” A cold, pointy, finger ran across Mim’s cheek and up to her temples. “And what strange eyes you have.”


Mim was rooted to the ground and dared not move. Whatever stood before her seemed to be a demon that had jumped off the pages of one of Ilanya’s stories, and as she glanced towards Miss Barley and Candy for direction, the two were expressionless. They stared ahead in some sort of trance. What was wrong with them?


A lightning bolt cracked overhead and the woman let out a high-pitched laugh. When her oversized mouth opened, Mim could see two rows of sharpened teeth that filled the inside: one in the front like normal, and another jagged row sitting just behind it. The two figures that accompanied her said nothing, remaining still and hidden under their cloaks.


As she looked down at the blond girl, for the first time in over a thousand years, curiosity crept into Morra’s mind. The girl had no smell, and try as she might, Morra Losis couldn’t sense a trace of her except with her vision. But even stranger were her eyes. Purple eyes like those she had only seen many ages ago, and the bearers of them had disappeared from the sphere before the Great War in the north had begun.


But yet here in front of her one remained, and she wondered to herself whether her queen would find interest in this young human. Oh, most certainly, she thought. This revelation was the only thing keeping her from devouring the succulent girl on the spot. But if she lost her now, she would have to hunt for her like mortals did, and that was certainly not going to happen. Then the most wonderful idea came to her mind.


With the centaurs it had always been the hunt, the Dwarves their precious jewels, and the Elves their knowledge. But with humans it had always come down to their desire for freedom and independence. And although she hadn’t been awake for long, she knew in this age that true freedom could only be attained by one thing:wealth. She knew exactly what this poor little mongrel desired most just by looking at her torn outfit and dirty hands. “Well, it seems that one servant around here knows how to appease a guest of status. And I have always prided myself on paying the help.”


Morra Losis snapped her fingers and one of the tall hooded figures glided over, producing a large coin purse. She dipped her hand in and pulled out a large handful of endins and sprinkled them into the pot of meat with a smile. The taller creature then went back to standing by its twin before she drew herself closer to the girl onceagain. “That is for the meat, dear.” She then reached into a pocket from the inside of her cloak and pulled out a very small black purse. It was made of a shimmery fabric and all over it were dark maroon shapes. “And this is for you.”


As her hand placed the small pouch in the girl’s free hand, a tremor went through her. She could barely contain her appetite. She grabbed Mim’s jaw with one hand and effortlessly lifted her off of the ground, running her forked purple tongue up Mim’s cheek. The pot dropped to the ground, sending pieces of raw pork and coins spilling onto the rough floors. Her grip was so tight that she felt the girl’s jaws beginning to crack. She hadn’t had a meal this intriguing in an age, and her resistance was crumbling to the need to satisfy her hunger. What can one little bite hurt? she thought. But as she thought of her master, she quickly let go, dropping the girl back to the ground and turning back towards the table. As she bent down and picked up a raw piece of intestine and dangled it in front of her face, she said, “I just don’t think this will do. I certainly do not eat off of the floor, and when I feed I have always desired something with a little more...spunk.” She turned towards the dark greasy haired girl and let out a low gurgle, briefly revealing her jagged rows of teeth. Lifting her enchantment, the girl came out of her stupor, and after a moment began shrieking and backing away. 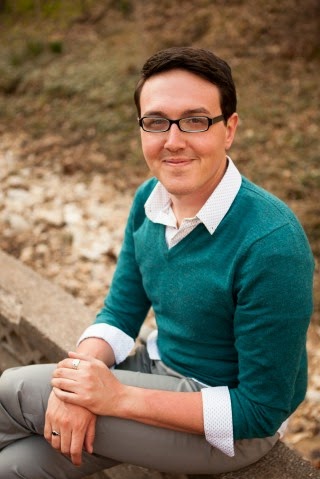 
John Swan has been an independent fiction writer since 2003, with the Aldaya Series being his first published work to date. During that time, he attended Southern Illinois University and graduated with two degrees, both with high honors. He has an Associates in the Sciences and a Bachelors in Meteorology and Climate sciences, with emphasis on research and written dictations.


He spent several years during school helping to open and manage a French Bistro before moving to Honolulu, HI, where he worked for the local Parks and Wildlife service and was finally able to give his writing career the full attention it needed.


His love for writing began at an early age, never passing up chances to submit his works to young writers’ forums through school and his local community. He grew up on a small farm in southern Illinois, but spent his summers in an enchanted little blue cottage on the banks of the Mississippi River. In this valley is where he wandered beneath the trees along the bluffs with his best friends, and where tales of hobbits, mages, boy wizards, enchanted wardrobes and Native American folk lore shaped his writing style and drove him to create an entire universe all his own. 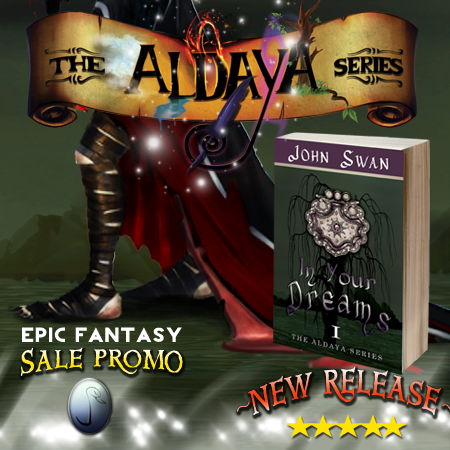 VIP Prize pack one conversation with the author and an advance copy of book 2.
a Rafflecopter giveaway
Posted by 3 Partners in Shopping at 12:09 AM