You Can Have My Heart, But Don't Touch My Dog by Dixie Cruz Book Blast, Excerpt, and Giveaway

You Can Have My Heart, But Don’t Touch My Dog 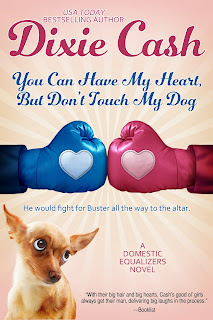 
After two divorces, Sandi Walker, entrepreneur extraordinaire, is on her own and loving it. As a devout animal lover, she has made a success of the only gourmet pet food bakery in Midland, Texas. She’s also a pet foster parent and has fifteen assorted abused and unwanted animals at home. When a golden-colored stray dog with an abundance of personality appears at her door, she can’t refuse him and she can’t keep from falling in love with him. She names him Waffle and gives him a permanent home.

General Manager of the Flying C Ranch, Nick Conway, has searched for months for his lost dog, Buster. Giving up on ever finding him, he looks for a new dog and finds a puppy at a pet grooming shop. While he went to the shop to see a puppy, he also encountered a beautiful redheaded woman he can’t put out of his mind. Little does he know that she found Buster in an alley and has now claimed him as her own. Sparks fly between Sandi and Nick when he steals Buster and sues her in court for custody. It will take a mouthy parrot, a sitting judge, the matchmaking skills of the Domestic Equalizers and Cupid himself to resolve this conflict.


Nick’s return to the booth interrupted those wayward thoughts. He carried a tray laden with food and two tall Styrofoam cups. He began to unload everything off the tray and set it on the table. Two baskets of hamburgers and fries and a couple of Hogg’s locally-famous fried pies enclosed inside parchment wrappers. They were half the size of a dinner plate.


She stared at the array of food. “That’s a lot of food. I don’t see a small hamburger.”


“A child’s hamburger is the size of a quarter. Not enough to eat. I got you a regular size.”


Controlling jerk. Sandi made a huff of annoyance. “You also got fried pies. What kind?”


“Apricot. The kind my granny used to make when I was a little tyke. Hogg’s uses lard in the crust, just like my granny did. That’s why they taste so good.”


She made a mental groan. “A fried pie made by these people probably has about five thousand calories.”


His brow scrunched into a frown. “You’re not gonna eat a fried pie after I got you one?”


She shook her head. “I am not. I did not ask for a fried pie. You obviously aren’t concerned with your diet, but I try to limit the carbs I eat. I don’t want to have a heart attack before I’m thirty-five and I want to be able to pass through the front door of my shop.”


He scooted the fried pie across the table toward her. “One little fried pie is not gonna give you a heart attack or put twenty pounds on you. Maybe a dose of sugar will put you in a better mood.” 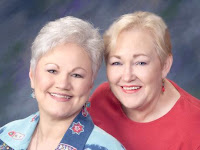 
Dixie Cash is Pamela Cumbie and her sister Jeffery McClanahan. They grew up in West Texas during the great oil boom, an era filled with "real-life fictional" characters who cry to be written about. Pam has always had a zany sense of humor and Jeffery has always had a dry wit. Surrounded by cowboys and steeped in country-western music, when they can stop laughing long enough they work together creating hilarity on paper. Both live in Texas--Pam in the Fort Worth-Dallas Metroplex and Jeffery in a small town near Fort Worth. Jeffery also writes steamy contemporary romance novels under the pen name of Anna Jeffrey.

Dixie will be awarding a $20 Amazon or B/N GC to a randomly drawn winner via rafflecopter during the tour.