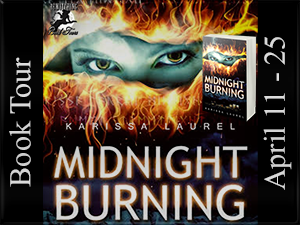 Solina Mundy lives a quiet life, running the family bakery in her small North Carolina hometown. But one night she suffers a nightmare of a vicious wolf devouring her twin brother, Mani, who lives in Alaska. When Solina learns her dream was real, she journeys to the Land of the Midnight Sun to search for answers.


Solina soon suspects Mani’s friends are more than they seem, and she’s certain they know more than they’ve admitted to the police. Val and Thorin resist and elude Solina’s efforts, but Skyla, an ex-Marine, joins her crusade for the truth.


As Solina and Skyla delve into the mystery surrounding Mani’s death, Solina learns her own life is tied to Mani’s friends, his murder, and the fate of the entire world. She must learn to control her newfound gifts and keep everyone safe because, if she fails, a long-lost dominion of gods and monsters will rise, and everything she knows will fall into darkness.


Some of Karissa Laurel’s favorite things are coffee, chocolate, and super heroes. She can quote Princess Bride verbatim. She loves to read and has a sweet tooth for fantasy, sci-fi, and anything in between.


Sometimes her husband convinces her to put down the books and take the motorcycles out for a spin or go hunting for rusty old relics at flea-markets. Karissa lives in North Carolina with her kid, her husband, the occasional in-law, and a very hairy husky named Bonnie.