This is my stop during the book blitz for The Urban Boys by K.N. Smith. This book blitz is organized by Lola's Blog Tours. The book blitz runs from 25 till 29 April, you can view the complete blitz schedule on the website of Lolaâ€™s Blog Tours. 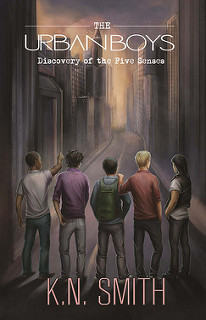 Blurb: The Urban Boys: Discovery of the Five Senses is an action-adventure story about five teen boys who are mysteriously exposed to a foreign energy source that gives them extremely heightened senses. Sight, sound, touch, taste, and smell become hypersensitive gifts that forever change the world. The story chronicles their effortless interrelations and later exposes the testing of their deep bonds. It introduces the reader to an array of supporting characters who alter the boysâ€™ lives forever. The Urban Boys offers young and mature readers central themes of loyalty, responsibility, honesty, fear, and triumph, which become artfully integrated with cinematic-level action and high drama. The story twists, turns, and grinds through elements of paranormal and action-adventure in a diverse, exciting, edge-of-your-seat narrative!

Overview: The storyâ€™s small town of Danville Heights, a carefully crafted universe, contrasts with the dark, gloomy town of Sandry Lake, where evil abounds. Upon the boysâ€™ mysterious incident with the energy source, theyâ€™re instinctively called to Sandry Lake to root out evil. Their senses guide them each time. However, secrecy about their mission, furious battles with evil thugs, extreme fatigue, and stress and pressure soon overwhelm the boys, but they must find a way to embrace their fate. A lurking, Dark Stranger seems to know their plight, and a strikingly beautiful, fearless girl lends way to heightened confusion. Shocking details about these two characters, and the evil antagonist, the dreaded Druth, twist and grind the story even further. Despite tension and fierce battles, will the boys hold it together long enough to fulfill their destiny?

Intriguing, intelligent, and full of action, The Urban Boys: Discovery of the Five Senses offers a memorable, emotion-packed, thrilling ride for young and mature readers alike!

You can find The Urban Boys on Goodreads

You can watch the trailer for The Urban Boys on Youtube


For the first time, the mellow, demure Ross trusted himself to speak up, to question the mounting dissention clouding their friendship. He remembered that only a short time ago a youthful adventure took place in this forbidden milieu. A place from where tales of strange happenings, mysterious noises, and unsolved disappearances emerged, or so it was said.


And during that youthful adventure within the preserve, when confronted by that mysterious accident, they all changed, and then he changed. Somehow, the misunderstood, glowing energy that dripped from those huge leaves caused a solo ambition. And it had only gotten started on a dangerous course that would be littered with intense brutality checkered with misguided emotion and overtones of force and power - a deadly combination anxiously waiting in the wings.


As a result of this line of questioning, and while wondering what would happen to Ross’ gift, Joaquin set his intention. Only nineteen years old, yet extremely demanding, he knew he would not be able to turn back. He let go of Ross’ arm, turned away, and ran his slender fingers through his thick, shoulder length, medium brown hair. At just under six feet, his lean yet muscular frame worked diligently to contain the rising tension within, being careful not to give any indication of his next move. A black tank top tightly hugged his chest to reveal lightly tanned skin that perfectly harmonized with his long, uneven hair.


And with his hair still clutched in his hand, he closed his eyes and breathed deeply as he listened for Ross’ movements. Pacing a little, he rationalized that he was the only adequate soul who could orchestrate and command a new way of life. Surely, a concoction of domination that would ultimately gratify only himself.

About the Author:
K.N. Smith is an American author and passionate advocate of childhood and family literacy programs throughout the world. She continues to inspire students of all ages to reach their highest potential in their literary and educational pursuits. Her creative, lyrical flair sweeps across pages that twist, turn, and grind through elements of paranormal and action-adventure in diverse, exciting, edge-of-your-seat narratives. K.N. Smith has over twenty years' experience in writing, communications, and creative design. She lives with her family in California.