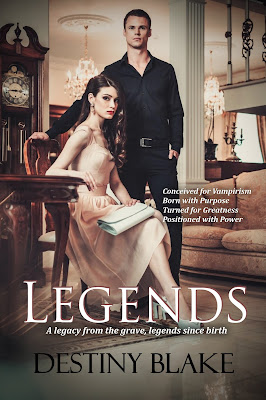 Vampire Legend Sinclair has a premonition. He dreams of a grand battle between humans and an elite class, demigods in a contemporary world. Privileged and arrogant, these “Entitled Ones” plan to hoard natural resources to ensure global longevity for their families and friends. Everyone else is disposable.

As the war of wars is set to unfold, Legend anticipates an uncertain future. He plots against rulers and nations, but soon devises a way to protect average citizens from the forthcoming agenda of destruction.

Siring numerous children, Legend leaves his North Carolina home only to return for his daughter and sons in the predawn hours of their eighteenth birthdays. They attend Summer Assembly, a training ritual that will prepare them for the whispering promise of a coming age destined to change the course of history.

Meanwhile, a select few hold fast to yesterday’s corrupt propaganda, an outline for disaster. With an evil plan for global evacuation and the extinction of all common men, the Entitled Ones organize their enforcement of a wicked initiative. But in their defeat, the Legend family will triumphantly rise as true wonders of the reformed world.

A legacy from the grave, legends since birth

Excerpt
About that time, a hissing noise filled the room. Everyone looked up and their gasps resounded. They were on their feet in record time as spiraling smoke twisted out of the vents and the room temperature hit hell-hot in a matter of seconds.
“Open this door!” Captive jiggled the knob. “Legend! Are you out there?”
Tole slammed his body against their only means of escape. “Let us out of here!”
They all joined him. Fists pounded in repetition. Everyone pleaded for help.
Gideon rushed to the eye-level window on the far wall. Jamming his fists against the panels, he cried out in agony as he glanced up at the billowing smoke above them. “Fire.”
“Aren’t you the smart one?” Umbrage ran his palms across the walls. “Hurry. See if we can find something to trigger a secret passageway.”
“You’ve watched too many movies,” Captive said.
As Gideon and Umbrage tried to find a way out, the air thickened with chemical-like vapors. They coughed, gagged, and suffered as they choked on fumes. Orange and red flames surrounded them. The blaze burned hotter.
“Keep your heads down! It’s another test!” Captive yelled.
In the middle of a coughing fit, Sin screamed, “Then we’re seconds away from failing!”
“Toughen up, sister. Even Legend’s games eventually find an end.” Captive stared into the fire and caught Gideon’s gaze. Perhaps it was then when Captive realized what Gideon had long since accepted.
The past few days had been necessary. They were vampires, damned to an eternal existence on earth but without a soul, their fate was sealed by fire. What they’d seen and heard, that was what awaited them if they didn’t follow Legend and save mankind. By saving the world, they spared themselves as well.
Everything their dad—Legend Sinclair—had shown them was foretelling in a sense, a grand exhibit of what they would endure if they didn’t survive. It served as inspiration, motivation to stay alive.
“Help!”  Tole hammered his fists against the door again. Like the others, he had revealed his greatest fear during Summer Assembly. Legend understood what specific triggers pushed each of them into panic mode.
Now, Tole faced his greatest demon—fire.
“Don’t do this!” He gasped, his voice wracked with fear. “I’ll do anything! Just let me out!” He collided with the door once more, but that door didn’t budge.
Gideon hurried to Sin, offering her limited protection, but comfort nonetheless. Diven and Umbrage reassured Tole while Griffin, Captive, and Saber promised to kill Legend given the opportunity. The more they threatened harm to the one who had turned them, the more swirling smoke filled the confined area.
“We were supposed to be stronger as a group,” Griffin said, coughing between syllables.
That much had been drilled in their heads and yet their current circumstances almost suggested the opposite. No one would gain the upper hand here.
Their hellish experience lasted several minutes, but it seemed like hours, maybe even days. There was no escape. They had one choice, an alternative that should’ve resounded as a simple unanimous decision. Instead, only five Legends emerged from the fire ready to dance with the fates and embrace their legacy with complete surrender.
The others were left behind.

About the Author
An avid reader and full-time writer, Destiny Blake enjoys YA paranormal, commercial and literary fiction, mysteries, thrillers, and unique fantasy novels. After 15 years of writing for the market, Destiny decided it was time to write what she liked to read. The end goal was to pen stories that readers would love and her grandchildren would later cherish as well.

The author invites all readers to follow her on Twitter @AuthorDestiny and to stay in touch by writing:
destinyblakeauthor@gmail.com. To help Destiny celebrate the debuts of Legends and Gatekeepers, readers can send their copy and pasted proof of purchase to the email above. Include a snail mail address to receive a promotional product. Please include “Legends & Gatekeepers Proof of Purchase” in the subject line. Offer ends on April 15, 2016. Void where prohibited by law.

GIVEAWAY:
a Rafflecopter giveaway
Posted by 3 Partners in Shopping at 9:43 PM