Tempting the Light by Bonnie Gill Book Tour and Giveaway 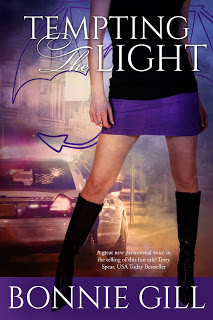 Bad luck magnet Abby Fitzpatrick gets fired, catches her boyfriend cheating with a mime, and is cursed by an evil genie who pops out of a tampon box. She’s bound and determined to remove the spell, and as fate would have it, the hottest guy she’s ever met is out to kill her.

River Stone, a Cryptid hunter for Legends and Myths Police Squad (L.A.M.P.S.), poses as a sheriff for Abby’s hometown of Haber Cove, New Jersey. He’s out to find and capture a man-eating gnome and bag the legendary Jersey Devil monster. Little does he realize, the woman who catches his heart is the same creature that he was sent to destroy.

Tempting the Light is the first novel in the L.A.M.P.S. series that features hunky secret agents who find true love while hunting and slaying dangerous Cryptids.

She writes Paranormal Romance with a twist of humor. When she isn’t writing you can find her on a haunted tour, volunteering at pet rescues, or digging around in her fairy garden waiting for fairies to show. She’s a member of Romance Writers of America, the Fantasy, Futuristic, and Paranormal chapter and the Windy City chapter.

She lives in Northern Illinois with her four rescue dogs, a big fat cat, and her ever patient boyfriend who laughs at all her goofy jokes.


a Rafflecopter giveaway
Posted by vicjbr at 2:38 AM