How to Manage a Marquess by Sally MacKenzie Virtual Tour, Excerpt, and Giveaway 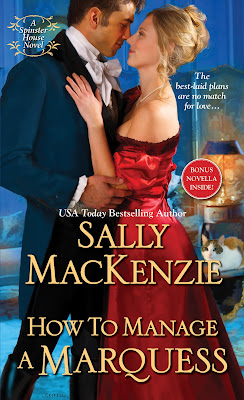 Two possible futures loom before Miss Anne Davenport. The first option: sharing an unhappy home with her father and soon-to-be stepmother. The second: a life of independence at the Spinster House—if only her friend, Cat, would vacate the premises and marry the Duke of Hart. A well-placed whisper about the pair’s secret tryst might speed the course of true love. But the duke’s stubborn cousin poses an obstacle. A ridiculously handsome, very persuasive obstacle…

Nate, Marquess of Haywood, has spent his life looking out for the duke, hoping to stave off a family curse. The only way to keep his cousin alive is to keep him single. That means convincing the intriguing Miss Davenport that her lovely lips could be put to far better use than gossiping. Kissing, for instance. In fact, Nate is beginning to hope that Miss Davenport’s destiny lies not in the Spinster House at all, but with him …


Ten-year-old Nate stopped with his hand on the library door.


“I just got word from Wilkinson,” he heard his father, the Marquess of Haywood, say from inside the room. “The Spinster House spinster has died.”


Something—a book?—slammed into something else. “God’s blood! And now poor Marcus will have to choose the new spinster. Oh, how I hate Isabelle Dorring. I hope she’s burning in hell.”


His parents must have heard him, because the door swung open.


“Nate! What are you doing lurking there?” Father asked.


“I-I left a book in the library, Father.” Nate swallowed. His cousin Marcus lived with them because Marcus’s father had died from Isabelle Dorring’s curse. “Is Marcus all right?”


Father smiled, putting a comforting hand on Nate’s shoulder. “Of course he is. He just has to go to Loves Bridge and choose a new tenant for the Spinster House, that’s all.”


Nate didn’t like that. His mother had told him many, many times how her father and Marcus’s father, how all the Dukes of Hart since the third duke, had died before their heirs were born, all because Isabelle Dorring had cursed their line. He was certain Isabelle was an evil old ghost, haunting the Spinster House.


“Can I come, too?” He was two weeks older than Marcus. He was used to watching out for his cousin.


Father’s smile widened. “That would be splendid, Nate. I’m sure Marcus will be happier with you there.” He looked at Mum and said, with false enthusiasm, “We can make an outing of it.”


Mum frowned and shook her head. “No. No, I wish I could go with you. You know I do. But I can’t bear that place.” She came over to hug Nate. “Keep Marcus safe for me, Natey.”


Mum always said that. And Nate answered the way he always did.


Nate sat by his mother’s bed, heart heavy. His father had died the month before; he was afraid his mother was dying now. It was as if she’d lost all desire to live in a world that did not include her Philip. Still, he hadn’t thought she’d fade this quickly. She’d been fine—well, sad, but still alert—last night. This morning, however . . .


She was so pale and shrunken. She’d been in and out of consciousness ever since her maid had called him to her bedside an hour ago.


He frowned. Marcus would want to be here. He’d sent word to London, but it was unlikely his cousin would arrive in time. Mum’s breathing was so labored—


Her eyes flew open. “Gerald,” she croaked, mistaking him for her long-dead brother.


He patted her fingers to calm her, swallowing his brief annoyance that she was using her last breaths to talk about his cousin rather than him. “I will, Mum. You know I will.”


“I couldn’t”—she struggled for air. “I couldn’t keep Gerald safe.”


She was too agitated. He needed to calm her, but how?


He hated feeling so helpless.


“But you loved Father.” He’d never doubted that. His friends’ parents might have taken lovers, but not his. Their dedication to each other had been as much a constant in his life as the sun rising.


Her head moved fretfully on the pillow. “Yes, but Philip could have married anyone. Gerald had only me.” Her hold tightened, her nails digging into his skin. “Keep Marcus safe for me, Natey.”


“Of course I will, Mum.” The words flowed from long practice.


“The curse . . . it will get stronger. When Marcus turns thirty, you’ll have to watch him very, very closely.” She tried to sit up.


He pressed her gently back against the pillows. “Perhaps Marcus will fall in love, Mum,” he said soothingly, “and break the curse.”


For a woman who appeared to be on the verge of death, her grip was like iron. “No, he won’t.”


“But he might, Mum.” Love matches weren’t common among the ton, but they did happen. “He’s only twenty-one. He’s got time. And when he does find a girl to love, the curse will end. It will all be over.”


“No!” Her fingers convulsed, her eyes boring into his, a wild desperation in their depths. “Don’t you see? The curse can’t be broken.”


“Of course it can. If a Duke of Hart marries for love—”


Her face twisted. “That’s a lie. My father loved my mother. I know he did. And he still died.”


Mum had never said this before. She must be confused. It wouldn’t be surprising. No matter how strongly one believed in an afterlife, facing death must be terrifying.


And if love wouldn’t break the curse, Marcus was condemned to a long, lonely life.


Nate made soothing noises. He didn’t know what else to do.


“Promise me—” Mum gasped for air. “Promise me you’ll keep Marcus safe”—she swallowed—“for as long as you can. Even if you have to put off marrying yourself. Nothing is more important than Marcus’s safety, Nate.”


Poor Mum. He would promise her anything if it would ease her passing.


He struggled to speak calmly. “Yes, Mum. Don’t worry. I’ll watch over Marcus. I swear I will.”


At last the stiff fear drained from her face. She let go of his hand, giving him a sweet smile. “You’re such a good boy, Natey. I know you’ll keep your word.”


And then she lay back, her eyes drifting closed. A look of peace flitted over her face just before the last bit of color left it.


His mother was dead. 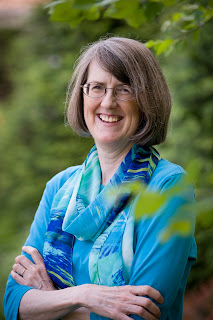 A native of Washington, DC, Sally MacKenzie still lives in suburban Maryland with her transplanted upstate New Yorker husband. She’s written federal regulations, school newsletters, auction programs, class plays, and swim league guidance, but it wasn’t until the first of her four sons headed off to college that she tried her hand at romance. She can be reached by e-mail at sally@sallymackenzie.net. Please visit her home in cyberspace at sallymackenzie.net.