Forever and One Week by Catherine Cairn Cover Reveal and Giveaway

Today is the cover reveal for Forever and One Week by Caroline Cairn. This cover reveal is organized by Lola's Blog Tours. 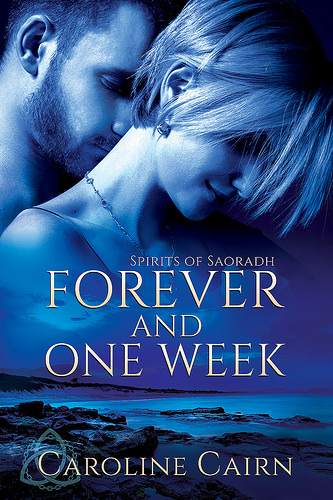 Spirit Logan despises the obedience he has to show to his humans, and prefers the enjoyable solitude of the Void. For three years, he has managed to threaten them into severing their bond, thus having his memory wiped of their existence. Except his latest human, an emotionless woman with a secret past, isn't scared of him. Worse, she doesn't care about his ability to make wishes come true.

Tessa, a twenty-six-year-old nursery teacher in Fort William, Scotland, doesn't expect a sullen ghost only she can see and touch to burst through her solid defences. Both dismayed and intrigued, she offers Logan a deal he can't refuse: to live with her in the human world for one week, at the end of which she will agree to release him.

Slowly, Tessa braves through the safety of her detachment towards people to show Logan some kindness. But the more her feelings deepen, the more Logan increases his distance.¦


Logan kept his distance as she walked home. She had removed her hair clip, her long fringe hiding half her face. Her attention didn’t settle on anyone. Anonymous figure, she passed people, shops, cars. Her elbow grazed the city walls a few times. A teenager yakking with his equally brainless friends bumped into her without stopping. She stumbled back before resuming her trip in silence.


So apparently, the smiles and energy were exclusive to the work place. He grimaced at the idiocy of it. At least she’s standing straight.


She reached her flat after one last rounded corner. The building presented well on the outside. The sash windows, the symmetrical lines and the decorated roof line pertained to a wonderful Victorian architecture. The inside on the other hand, had lost its authenticity. Whoever had worked the hallway had done a half-assed job and destroyed the features that should have remained. Shame.


He let her remove her scarf, her shoes and her jacket. He let her put the kettle on and make herself some coffee. He let her drink the first sip, standing in the poky area an estate agent would have trouble calling a kitchen.


“How long are you going to pretend I’m not here?” he snapped.


Three more sips, and not one attempt at eye contact.


His blood went from simmering to boiling. He darted towards her, planted his palm over her temple and forced her head back. “Are you on drugs or something?”


Her eyes flashed with something he couldn’t read. Not for long though; the dead stare and limp body were soon back under his touch.


He flung his arms up. “Fuck’s sake.” Who did she think she was? She ought to be running by now, far from him.


Coffee finished, she washed the mug and towelled it dry. The cloth she used was frayed, the counter marked by old stains.


“Handsome place you have here.” Clean, though in dire need of a makeover, which suggested the woman lived alone, or wasn’t interested in DIY. Either way, she could have phoned a joiner, or a painter. He used his frame to crowd her once again.


“Ask me,” he said, her chin between his fingers. “Ask me to give you some brand new furniture.”


“Ask me,” he repeated, his grasp more forceful. “Ask me, for goodness sake.”


If her pulse hadn’t been visible under her skin, he could have sworn he was holding a mannequin.


His voice boomed in the room. He hadn’t yelled this loud since Olivia had crossed the road without looking.


“Why don’t you react?” he continued, temper all but lost. “Ask me to give you a penthouse apartment, ask me to fill your bathtub with money, ask me to load up your fridge, anything!” He wanted to shake this wooden doll who had had her life sucked out of her since her departure from the nursery. He wanted to scream some more to wake her up. She could be a proper human being, he had witnessed it. So why was she back to this infuriating comatose state?


Enraged, his fingertips clawed in her scalp, anger and confusion mixing and melting into one. He yanked her against him and slammed his mouth on hers.


There wasn’t any lust or tenderness in their joined lips. Hers were slack, his were tingly and unrepentant. His teeth bit inside, so forceful he was. Her body didn’t shake. The mug and the towel remained under her firm grip.


“Why don’t you push me?” he roared, jerking himself from her. “Why do you let me do this to you? Do you realize what I’m capable of? What I could do to you? I could so easily—I could…” He tripped over his own feet as he glided away from her, through her table, through her walls, through people in the street, far, far away from her. The pounding of his own heartbeat resonated in his ears. “I could hurt you.”