Between a Rock and a Hard Place
by Marty Wingate

I loved the characters between the banter of Chris and Pru and the wedding plans being funny this series is great. The fact you are learning about gardening along the way is not bad either. If you enjoy cozies and gardening this is a great series for you.
~Bab’s Book Bistro

I can’t say enough good things about Author Marty Wingate’s Potting Shed Mysteries, especially Between a Rock and a Hard Place, her best one yet!
~Jane Reads
With a cast of characters so fun and well developed, The story will keep you captivated and intrigued right to the last page.
~Shelley’s Book Case

It was well written and I enjoyed the banter between the characters…This was a great book that kept me guessing till the very end.
~Melina’s Book Blog​
Between a Rock and a Hard Place, the “Potting Shed Mysteries” as a whole….and, ok, anything written by Marty Wingate are on my list of favorites.
~Back Porchervations

Pru Park is one of my favorite cozy mystery heroines.
~ Michelle’s Romantic Tangle 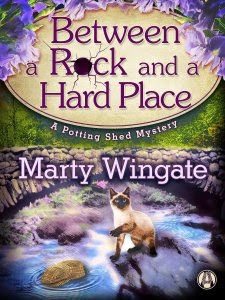 Perfect for fans of Laura Childs, Ellery Adams, and Jenn McKinlay, Marty Wingate’s enchanting Potting Shed Mystery series heads to Scotland as Pru Parke plans her wedding . . . all while a vengeful murderer is poised to strike again.
After her romantic idyll with the debonair Detective Chief Inspector Christopher Pearse culminates in a marriage proposal, Pru Parke sets about arranging their nuptials while diving into a short-term gig at the Royal Botanic Garden Edinburgh. At hand is the authentication of a journal purportedly penned by eighteenth-century botanist and explorer Archibald Menzies. Compared to the chaos of wedding planning, studying the journal is an agreeable task . . . that is, until a search for a missing cat leads to the discovery of a dead body: One of Pru’s colleagues has been conked on the head with a rock and dumped from a bridge into the Water of Leith.
Pru can’t help wondering if the murder has something to do with the Menzies diary. Is the killer covering up a forgery? Among the police’s many suspects are a fallen aristocrat turned furniture maker, Pru’s overly solicitous assistant, even Pru herself. Now, in the midst of sheer torture by the likes of flamboyant wedding dress designers and eccentric church organists, Pru must also uncover the work of a sly murderer—unless this bride wants to walk down the aisle in handcuffs. 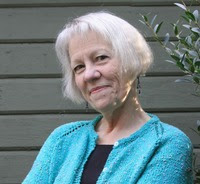 Marty Wingate is the author of two previous Potting Shed mysteries, The Garden Plot and The Red Book of Primrose House. Her new Birds of a Feather Mystery series debuted with The Rhyme of the Magpie. Wingate is a regular contributor toCountry Gardens and other magazines. She also leads gardening tours throughout England, Scotland, Ireland, France, and North America. More Potting Shed and Birds of a Feather mysteries are planned.