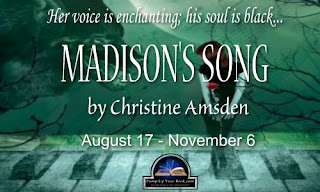 
Together for the first time since that terrible night, Scott and Madison drive to Clinton’s home only to discover that he’s vanished! Frantic now, Madison must overcome her fears and uncover hidden strengths if she hopes to save him. And she’s not the only one fighting inner demons. Scott’s are literal, and they have him convinced that he will never deserve the woman he loves. 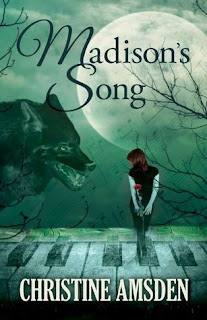 “In this entertaining series opener, Amsden (The Immortality Virus) introduces readers to the eponymous Cassie, a decidedly mundane member of a magical family. …Readers will enjoy Cassie’s fish-out-of-water struggles as she fights magical threats with little more than experience and bravado.” ~ Publishers Weekly


Madison’s Song is available for order at 
At the age of 16, Christine was diagnosed with Stargardt’s Disease, a condition that effects the retina and causes a loss of central vision. She is now legally blind, but has not let this slow her down or get in the way of her dreams. In addition to writing, Christine teaches workshops on writing at Savvy Authors. She also does some freelance editing work. Christine currently lives in the Kansas City area with her husband, Austin, who has been her biggest fan and the key to her success. They have two beautiful children.