What To Do With A Duke by Sally Mackenzie Book Tour 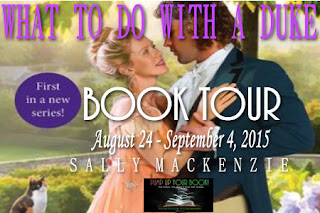 What To Do With A Duke


Welcome to the charming, fatefully named village of Loves Bridge, where a woman destined for spinsterhood can live a life of her own choosing—or fall unexpectedly, madly in love…


Miss Isabelle Catherine Hutting would rather be lounging in the library than circling the ballroom in search of a husband any day. So when Cat hears that the town’s infamous Spinster House is open for a new resident, she jumps at the chance to put all this marriage business behind her. But first she must make arrangements with her prospective landlord, Marcus, the Duke of Hart—the most handsome man she’s ever seen, and the only man who’s ever impressed her in the least…


With her wit, independent spirit, and not least of all her beauty, Marcus can’t help but be stirred by Cat. It’s terribly unfortunate he’s not looking to marry, given the centuries-old curse that left his family with the Spinster House to begin with. No duke shall live to see his heir’s birth. But is there a chance the curse could be broken—in true fairy-tale fashion—by an act of true love? The race to Happily Ever After is about to begin…


What To Do With A Duke is available for order at 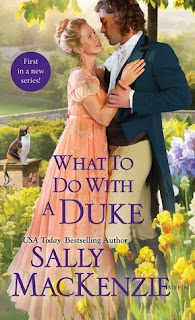 USA Today bestselling author Sally MacKenzie writes funny, sexy romances set in her favorite time period (other than the present): Regency England. Her novella, “The Duchess of Love,” was a 2013 RITA® finalist, and two of her books—The Naked King and Bedding Lord Ned—made ALA Booklist’s top ten romances for their respective years. Many of her books are available in audio format, and her stories have been translated into Czech, French, Indonesian, Japanese, Norwegian, Portuguese, Romanian, Russian, Spanish, and Turkish.


A native of Washington, D. C., she lives with her husband in suburban Maryland, not far from her childhood home.


Book featured at What Is That Book About


Guest blogging at Reviews by Crystal