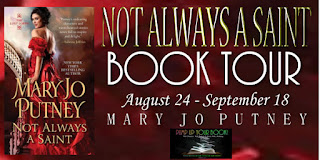 Not Always A Saint


After the death of his sweetheart when he was at university, Daniel Herbert buried his grief in medical studies and his passion for healing. Viewed as a saint by those who know him, in his own mind he never quite manages to live up to his own high standards.


Most men would be thrilled to learn they’ve inherited a title and estate from a distant relative, but Daniel is appalled because the burden of wealth will interfere with his medical calling.  Warily he accepts that he must enter society and seek a wife—a sensible woman who can oversee his properties, leaving him free to continue his work. He does not expect to become intoxicated by a woman called the Black Widow, who is as mysterious as she is shockingly beautiful…


Jessie Kelham’s looks have always been a curse. Now alone with a young daughter and a perilous secret, she is in need of protection. But dangerously attractive Daniel Herbert is not the kind of husband she has in mind. If he recognizes her, the demons of her past will surely erupt. Yet they cannot keep apart—and soon they are drawn into a union that may bring joy—or shattering danger… 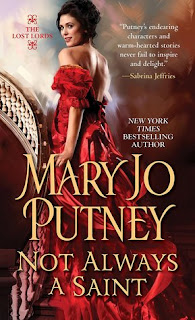 
Not Always a Saint is available for purchase at

Mary Jo Putney was born in Upstate New York with a reading addiction, a condition for which there is no known cure.  After earning degrees in English Literature and Industrial Design at Syracuse University, she did various forms of design work in California and England before inertia took over in Baltimore, Maryland, where she has lived very comfortably ever since.


While becoming a novelist was her ultimate fantasy, it never occurred to her that writing was an achievable goal until she acquired a computer for other purposes.  When the realization hit that a computer was the ultimate writing tool, she charged merrily into her first book with an ignorance that illustrates the adage that fools rush in where angels fear to tread.


Fortune sometimes favors the foolish and her first book sold quickly, thereby changing her life forever, in most ways for the better.  (“But why didn’t anyone tell me that writing would change the way one reads?”)  Like a lemming over a cliff, she gave up her freelance graphic design business to become a full-time writer as soon as possible.


Since 1987, Ms. Putney has published over forty books and counting.  Her stories are noted for psychological depth and unusual subject matter such as alcoholism, death and dying, and domestic abuse.  She has made all of the national bestseller lists including theNew York Times, Wall Street Journal, USAToday, andPublishers Weekly.  Five of her books have been named among the year’s top five romances by The Library Journal, while three were listed in the Top Ten Romances of the year by Booklist, published by the American Library Association.


A ten-time finalist for the Romance Writers of America RITA, she has won RITAs forDancing on the Wind and The Rake and the Reformer and is on the RWA Honor Roll for bestselling authors.  She has also been awarded two Romantic Times Career Achievement Awards, four NJRW Golden Leaf awards, plus the NJRW career achievement award for historical romance.  In 2013 she was awarded the Romance Writers of America Nora Roberts Lifetime Achievement Award.


Though most of her books have been historical romances, she has also published three contemporary romances, several paranormal historicals with strong fantasy elements, a young adult historical fantasy trilogy, and numerous novellas and short stories.  She is currently writing the New York Times list bestselling Lost Lords historical romance series for Kensington.

Ms. Putney lives near Baltimore, Maryland with her nearest and dearest, both two and four footed.  She says that not least among the blessings of a full-time writing career is that one almost never has to wear pantyhose.


Book reviewed at From Me To You…


Book reviewed at First Page to the Last


Book featured at Book Reviews and More by Kathy


Book featured at The Dark Phantom
Posted by 3 Partners in Shopping at 11:46 PM