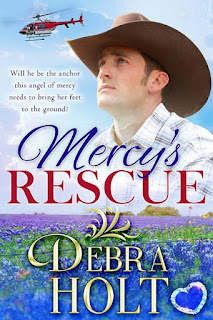 Fighting for his life after an ambush, Sheriff Josh Wellman awakes to find himself looking into the eyes of a real-life angel of mercy. Despite his groggy condition, he knows his life has changed the instant their hands touch.

Devastating heartbreak has left Mercy Smith's faith in tatters, her heart guarded against more loss. Her dedication to the air evac trauma team she leads has insulated her from the realities of the earth below, so now Josh faces the biggest challenge of his life.

Can he find a way around the walls that fortify her heart and convince this angel to stay on the ground with him? Can Mercy open herself to life again and find a way to restore her faith in God ... as well as love?

“Three minutes out. Descent begins in one.” The pilot’s voice crackled through the headset as he tossed a look over his shoulder to Mercy, strapped into the jump seat. She responded with a quick thumbs-up. “The scene is secured,” he added. “We’re in and out fast. There’s only one to transport.”

A dull, leaden weight sank to the pit of her stomach. Mercy Smith knew his words meant the other injured person had died before their arrival.

“We can’t save them all, Mercy.” Paul Robards, the second medic onboard who was seated across from her, responded to the shadowed look that crossed her face. “Some things are out of our control.”

“That’s true. I just wish we had the chance to try.” She’d served four years in the trauma-one unit on the ground before accepting the promotion to join the air evac as team leader, so she was a realist. She knew they would lose some of the patients they were called to assist, but that never stopped the feeling of defeat when they lost someone before they could intervene and attempt to save them. Mercy used to tell herself that everything was in God’s hands. She didn’t delude herself with that platitude any longer. The only hands she could count on were the two folded in her lap. She just needed the opportunity to try.


Born and raised in the Lone Star state of Texas, Debra grew up among horses, cowboys, wide open spaces, and real Texas Rangers. Pride in her state and ancestry knows no bounds and it is these heroes and heroines she loves to write about the most. She also draws upon a variety of life experiences including working with abused children, caring for baby animals at a major zoo, and owning a wedding planning business (ah, romance!).


Debra’s real pride and joys, however, are her son, an aspiring film actor, and a daughter with aspirations to join the Federal Bureau of Investigation. (more story ideas!) When she isn’t busy writing about tall Texans and feisty heroines, she can be found cheering on her Texas Tech Red Raiders, or heading off on another cruise adventure. She read her first romance...Janet Dailey's Fiesta San Antonio, over thirty years ago and became hooked on the genre. Writing contemporary western romances, is both her passion and dream come true, and she hopes her books will bring smiles...and sighs... to all who believe in happily-ever-after’s.


The Seymour Agency represents Debra and she is soon to have two contemporary romances published by Spencer Hill/Tulip Romance and Astraea Press. Debra invites you to visit her website at www.debraholtbooks.com. She loves to hear from other aspiring authors or readers via email at debraholtbooks@gmail.com.