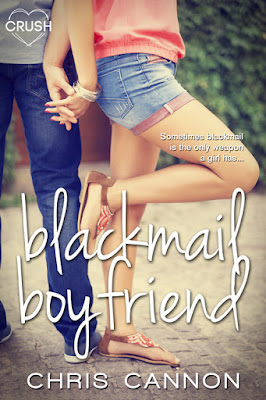 Summary from Goodreads:
Sometimes, blackmail is the only weapon a girl has…

Bryce didn’t know the other Haley even had a boyfriend. He was just trying to get his ex off his back. And now doesn't know what's more unbelievable, not only is—that he's he being blackmailed,  or that he's being blackmailed by an honor student. His little “hook up” was supposed to end his problems with girls, not create new ones. Not only that, but his new “girlfriend” has two overprotective brothers, three-legged dogs, her father mows grass at the country club, and she's…well, difficult. And different.

Besides, everyone knows that perfect boys never fall for imperfect girls…Sometimes, giving in is all a boy can do…Can something so fake turn into something real?


Bryce stood outside of the theatre looking like an Abercrombie model, wearing dark jeans, a pale blue shirt, and a black leather jacket. As we climbed out of the car and strode across the parking lot, I was privy to the Bryce Colton reality show, where two girls, each as tall as he was, engaged in a hair-toss and giggle-flirt fest.


He laughed and talked with both of them, touching each of them on the arm in a subtle way. As we drew closer, he spotted us, or should I say, me. Do you think he told those girls his date was here and graciously excused himself from the conversation? Nope. He made eye contact with me, nodded in acknowledgement and then...he continued his conversation.


Real date or not, that was rude, and disrespectful, and I was ten seconds away from telling those girls he was a post- op-transsexual and all his parts were not in working order. Or maybe I should post that information on YouTube. It was a satisfying fantasy. In reality, I stood off to the side with Jane and Nathan, and waited for Bryce to wrap up whatever he was doing.


When he joined us, he said, “Hi.” And nothing more. Why did he have so much to say to those girls while I was only worth a one-syllable greeting? Was there any way I could realistically dump a cherry slushie in his lap during the show?

About the Author
Chris Cannon lives in Southern Illinois with her husband and her three dogs, Pete the shih tzu who sleeps on her desk while she writes, Molly the ever-shedding yellow lab, and Tyson the sandwich-stealing German Shepherd Beagle. She believes coffee is the Elixir of Life. Most evenings after work, you can find her sucking down caffeine and writing fire-breathing paranormal adventures or snarky romantic comedies.

GIVEAWAY:
a Rafflecopter giveaway
Posted by 3 Partners in Shopping at 1:24 AM