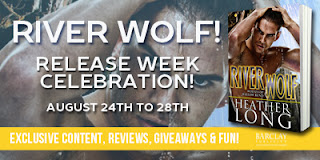 
River Wolf by Heather Long is a hot, sexy, and snarky tale of redemption, betrayal, healing, and the power of love.
After a murderer tore his pack apart, Alpha Brett Dalton must put the pieces back together again while solving the mystery of the woman who captivates him. Readers who’ve fallen for the Willow Bend wolf pack with fall even harder for this 7th book in the series. Packed with action, animal instinct, and tension, this book will leave you panting for more.
Follow the blog blitz August 24th-28th! One grand prize winner will receive a Wolves of Willow Bend SWAG Basket! Enter HERE or through the form below!


Brett Dalton, Alpha of Hudson River, isolated himself from his pack mates after one betrayed him. The once, easygoing Alpha has become taciturn, remote and unforgiving. His pack worries for him, but they too have suffered a devastating blow. When several members leave to join Three Rivers, the pack faces the threat of dissolution until Brett's best friend and Lone Wolf, Luc Danes returns to Hudson River accompanied by a beautiful young human—or is she? Something about the woman consumes Brett. Has Luc come home to help or to take the pack from Brett?


Colby Jenson wrapped up thousands of hours of community service working at the hospital in Maine when an injured Luc Danes rolled through the door. The impossible patient drove the nurses crazy, but when Danes offered her money no strings attached to drive him to New York, she agreed. The last thing she expected was to arrive in the small Westchester County town and to meet the craziest collection of residents—especially the devastatingly sexy Brett Dalton. Part of her wants to hit the road, the rest wants to make him smile and he keeps making excuses for her to stay.


Then she sees the wolves...and is exposed to a world she can barely imagine. When Brett discovers a secret about her, nothing will be the same again. Now she will find herself torn between a world she isn't sure she can understand and the man who has taken her heart hostage...


Praise for the Wolves of Willow Bend series:


“Long dished out a lot of unexpected twists and turns and did a great job tying it all together. The build-up and bits of action kept me up late at night flipping the pages.” – Booked & Loaded


"ROGUE WOLF is a fast paced, intriguing look into the world of shifters. Salvatore is old world a bit stodgy and Margo is very much new world and on top of that a lone wolf and Enforcer. How is it possible that these two could be mates? In author Heather Long's vivid and fun imagination it's very easy." - Fresh Fiction

"BAYOU WOLF is in a word ... amazing. All the reader can do is hold on for the ride and enjoy the fireworks." - Fresh Fiction


“If you love sexy wolf shifters, sweet love stories and action then you have to pick up UNTAMED WOLF by Heather Long.” - Annetta Sweetko, Fresh Fiction


So not ready to be awake…


A knock on the door intruded in her drifting and she groaned. Dammit, she was a guest. She couldn’t stay in bed all day. In fact, what she needed to do was get up, shower, dress and get her ass on the road. Florida seemed a hell of a long way to go, though. Rolling over, she shoved the blankets away then climbed out of the bed. Glaring at the light between the curtains, she rubbed a hand over her face, then stumbled to the door.


Opening it a crack, she gazed at her host. Goddammit. He looked perfect. Dressed in a clean, nicely pressed shirt with the top two buttons open to reveal the faint curls of dark against his chest and smelling like heaven, he looked good enough to eat. His hair wasn’t even damp, though it fell in a soft wave toward his forehead. He’d been up long enough to shower and dress—and he wore a smile.


“Ugh,” she sighed. “Please God tell me you are not one of those happy morning people.”


The corner of his sensual mouth quirked higher. The effect on his expression devastated her sleepy senses. No human should ever look so damn good without coffee. The combination of rake and boy next door added to his appeal, but the trace of scars and mottled skin gave him a ruggedness she desperately wanted to smooth away. “I woke you.”


“Not exactly,” she admitted, rubbing her cheek against the door and leaning on it a little more heavily. Everything ached and she wanted to go back to sleep. “I’m used to getting by on a lot less sleep.” And rolling out of bed to go to work for eight hour shifts that as often as not turned into ten to twelve hours on her feet. “I think I am tireder than I thought.” She yawned the last three words, and when she glanced at him again, his expression softened.


Extending a finger, he traced the line of her cheek and it was a soothing motion, one which had her eyes half-closing in pleasure. “Go back to bed, Colby.” His voice washed over her. “I’ll be in my office working.”


“I can’t laze about in bed all day.” No matter how good it sounded.


“Because…” She had to go to Florida or at least say her goodbyes. She was a guest and not even an intentional one. “…Luc. I should probably check on him.”


“He’s fine, the doctor is with him.” The indulgence in his voice evaporated, but the steadiness in his tone remained. “Go sleep. When you wake up, come find me. We’ll have coffee.”


“Double pot? I made one, I can run it through again.”


Colby groaned at the idea. Now that he’d mentioned it, she could smell the coffee. It proved even more alluring than the sweet vanilla and jasmine entwining the pine of his cologne on her pillow. Releasing the door to stretch, she would have thumped her tail if she’d had one. “Yes, please. If it wouldn’t be too much to ask.”


Silence greeted her comment, and she found Brett gazing at her. Rapt admiration in his eyes as he trailed his gaze down her body and up again.


F*** me… She still only wore a t-shirt and panties and she’d just given him a show. “Crap. Sorry.” Slamming the door shut, she leaned against it. Adrenaline burned through the remaining traces of sleepiness, adrenaline and a healthy dose of lust. Having him look at her like that warmed inside and out.


“Please,” his voice stroked her through the door. “Don’t apologize. I’ll go fix the coffee. Come and find me.”


The invitation had her toes curling and she bit her lip. “I will,” she said, then added in a low whisper. “I promise.”


A shiver skated over her spine and she closed her eyes. Maybe she should have invited him inside to go back to bed with her. Inappropriate as hell, and impulsive, but she bet Brett would wake her even better than the coffee.


Other Books in the Wolves of Willow Bend Series

National bestselling author, Heather Long, likes long walks in the park, science fiction, superheroes, Marines, and men who aren’t douche bags. Her books are filled with heroes and heroines tangled in romance as hot as Texas summertime. From paranormal historical westerns to contemporary military romance, Heather might switch genres, but one thing is true in all of her stories—her characters drive the books. When she’s not wrangling her menagerie of animals, she devotes her time to family and friends she considers family. She believes if you like your heroes so real you could lick the grit off their chest, and your heroines so likable, you’re sure you’ve been friends with women just like them, you’ll enjoy her worlds as much as she does.

Visit any or all of the following blogs for your chance to win!


A Little Fiction of Every Flavour