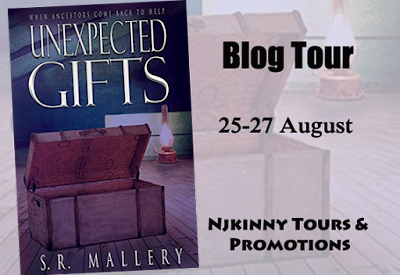 Welcome to my stop on the Blog Tour of Unexpected Gifts by S.R Mallery.
"Unexpected Gifts" is the story of a confused college student who gains clarity in life when she begins to read the journals and diaries of her ancestors from America's past.
Checkout my post and enter the cool giveaway! :)

Follow the Tour to read Interviews, Excerpts, Reviews and Guest Posts. Checkout the schedule of the Tour: Click Here 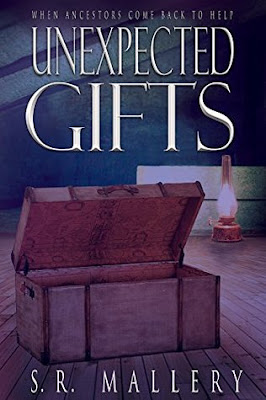 Blurb:
Can we learn from our ancestral past? Do our relatives’ behaviors help mold our own?

In "Unexpected Gifts" that is precisely what happens to Sonia, a confused college student, heading for addictions and forever choosing the wrong man. Searching for answers, she begins to read her family’s diaries and journals from America’s past: the Vietnam War, Woodstock, and Timothy Leary era; Tupperware parties, McCarthyism, and Black Power; the Great Depression, dance marathons, and Eleanor Roosevelt; the immigrant experience and the Suffragists. Back and forth the book journeys, linking yesteryear with modern life until finally, by understanding her ancestors' hardships and faults, she gains enough clarity to make some right choices.

~HERE'S WHAT READERS ARE SAYING ABOUT UNEXPECTED GIFTS BY S. R. MALLERY~
“The author has a remarkable gift. The amazing ability not only to bring rich, historical events to life, but also the ability to perfectly blend different generations…”
“It simply is one of the best books I've ever read. I wish I could give it six stars!”
“I have never read a book that wasn’t a textbook that was able to successfully cover so many time frames in such little space, with the accuracy you really would expect from reading the journals of those who had actually lived in those times.”
“Colorful writing, recreation of periods that prove adept challenges for any films about the influences of the past being made, and all of this is written with such style that it often times is dazzling...”
“SR Mallery has created an important and impressive monument of a novel.”
“If only my history teacher would have taught history like Mallery has, enriching it with living, feeling people that the reader can equate to, I would have been a better student.”
“Long after the completion of the book, I missed the characters and the impact their stories made on me. This one really touched me deeply.”
“Beautifully and sensitively written, anyone who loves a good story interwoven with actual historical events will enjoy this very special novel.”
“A master storyteller has been at work, and this marvelous piece of writing is the result.”
“I'm in awe of how the author could write about the events so realistically, putting the reader firmly into different time periods in America's history.”
“… she blends the past and the present with a seamless texture that only a “true” storyteller can manage.”
“This is a book you can keep on your shelf to read over and over…”

S.R. Mallery has worn various hats in her life. First, a classical/pop singer/composer, she moved on to the professional world of production art and calligraphy. Next came a long career as an award winning quilt artist/teacher and an ESL/Reading instructor. Her short stories have been published in descant 2008, Snowy Egret, Transcendent Visions, The Storyteller, and Down In the Dirt.

Open only to those who can legally enter and receive the prize. Winning Entry will be verified prior to prize being awarded.No purchase necessary. You must be 18 or older to enter or have your parent enter for you. The winner will be chosen by rafflecopter and announced here as well as emailed and will have 48 hours to respond or a new winner will be chosen. This giveaway is in no way associated with Facebook, Twitter, Rafflecopter or any other entity unless otherwise specified. The number of eligible entries received determines the odds of winning. Giveaway was organized by Nikita (Njkinny) from Njkinny Tours & Promotions and sponsored by the author. VOID WHERE PROHIBITED BY LAW.
Excerpt

“First thing I killed was no kind of thing at all. It was an enemy
soldier, which was a hell of a lot easier to say than the first thing I ever killed was a man.”
--Steve Mason

“...Nearing the village, we passed women in their beige tunics, black pants, and Sampan hats, shouldering thick bamboo rods weighted down by buckets of water. Most kept their heads lowered as they walked, but the few who didn’t, stared up at us with dead, black-brown eyes and pressed lips. The afternoon was drawing to a close by the time we reached a village compound that reeked of nuoc maum rotten fish sauce and animal dung. An old, leathery woman, squatting by her hooch was our welcoming committee, but once she saw us shuffle by, she scurried back into her hut, clacking loudly in Vietnamese as chickens pecked at rice granules, bobbing their heads up and down in 2/4 time.
Carbini cut to the chase. “First, pull every one of those gooks outta their hooches, then line them up here,” he barked.
I watched my troop comb each thatched home, rounding up families of all ages and herding them out into the open like a cattle drive in Oklahoma. I, too, started the mission and stooping into one of the huts, saw a young woman sitting on a straw mat, eating some rice in a black bowl, a young child at her side.
She was exquisite—the best possible combination of French and Chinese ancestry, with such delicate features, she made my heart ache. My immediate instincts were to protect her and her son from Carbini and this horrendous war, but she just gazed up at me, emotionless.
I could hear Carbini yelling orders to get a move-on, and I signaled this girl, this treasure, to follow me. She shook her head vehemently, and curled her legs around her son. I motioned again, but still, she refused. I froze, unable to think, but when Carbini popped his head in the doorway and snarled, “Weylan!” she got the message and followed me out.
Whimpering slightly, she joined her fellow villagers, gripping her child’s hand and wiping off a tear that had slid halfway down her cheek. I suddenly pictured slave owners in pre-Civil War days and felt my lunch rise up in my throat.
“Now, get your Zippos ready, men.” As Carbini’s face flushed red, I sucked in my breath. He caught sight of my reaction and came over. “Weylan here doesn’t like my orders. Anyone else here who doesn’t like my orders?” Nobody spoke up.
He opened up one of my backpack pockets, yanked out my Zippo lighter, and shoved it into my face. Immediately, you could hear the snap of pockets opening and boots shifting. We were getting ready to Rock ‘n Roll.
Carbini was first. He marched over to a hooch, flipped on his Zippo, and carefully lit the underbelly of its thatched roof. It smoldered for a few seconds, a thin, rising wisp of smoke twisting in the tropical air. From that, a flame grew, nibbling at the straw with a low, blue heat before suddenly bursting into a torch, arcing up towards the sky in a yellow-hot blaze.
Carbini turned to us and nodded, his eyes glazed. This was our cue, yet I spun around to search for the girl, who was at the back of the pack, crying softly as she hugged her son. I glanced over at some of the other men, their hands jammed deep into their pockets, and decided to follow their lead. The fire was raging full force on each hooch now, the thatch and bamboo crackling like a 4th of July fireworks display, leaving its reflections in the villagers’ eyes and turning the sky dark with thick, bulbous smoke.
“Weylan! You son-of-a-bitch coward! You’re no better than the rest of us, you hear me?” Carbini started to charge over, then stopped mid-stride.
In the distance, a large formation of F4’s was headed our way, torpedoing fireballs of napalm every several hundred yards and scattering screaming villagers down the main road. We were ordered to take cover, but followed the fleeing Vietnamese instead, charging after them and trying not to show our own fear...”