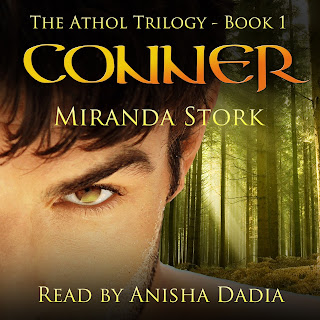 Erin is a young psychologist, with no time for anything but her work, and unable to remember anything about her past. She leads an uneventful life, but a lonely one, in which she secretly wishes for a soulmate...


Conner is an unusual patient who approaches her, thrusting her into a strange world of darkness that runs beneath our own. He believes himself to be a creature of legend-a werewolf. But he also draws Erin with a roguish charm, and an irresistible feeling that seems to bind them together...


Conner desperately tries to save her from an unknown evil that pursues her with a relentless passion that crosses centuries, an evil that once took her very soul away, somewhere in Erin's lost memories.


As she becomes more entwined in a series of events that will remind her of who she really is, will she make it away from the oncoming darkness unscathed...?


Amazon US Amazon UK Amazon CAN


"5 stars! One of the best novels I have read all year!" --Nicole Hill, Author of Legacy Forgotten, 5 Stars


"You are hooked whether you like it or not! A great read." --Maxi Shelton, Author of Sold Into Marriage, 5 Stars


"'Conner' took me on a wild, fantastic and exciting ride!" --Trish Marie Dawson, Author of 'The Station' Series, 5 Stars


"Conner is a must read for all werewolf fans. It has a fresh spin on wolves, and I thought it was great." --Fictional Candy, 4 Stars


Erin tossed and turned. Her bed sheets were tussled up, one pillow lying on the floor as she shifted her limbs in anguish. She was not sleeping well tonight.


...Something raced towards her, crashing through the branches and leaves. She was sobbing and running as fast as she could, but she was cold and wet, and her feet were cut and bleeding. Her clothes hung off her, soaked until they became dead weights.


A small clearing lit with brilliant sunshine danced in front of her, teasing her with the sight. She ran towards it, trying to scream for help, but her mouth was full of cotton wool, and no sound came out.


Behind her, the breathing and snarling became louder and louder until it filled and echoed in her ears. Frantic, she looked around for somewhere to hide, but all she could see were trees—no, wait! There was a small hut!


Crying with happiness, Erin sprinted towards it, but she was knocked flying by something large and dark.


She turned to stare, and backed away in panic. An eight-foot black creature with burning amber eyes glared at her.


“You must never go inside! NEVER!”

Erin shot bolt upright, cold sweat dripping from her forehead and running into her eyes. She took a deep breath shakily, and snapped her bedside light on, the reassuring light flooding her bedroom.


“Oh, Erin,” she murmured to herself, wiping the sweat from her brow with a shaking hand. Glancing around her warm, safe bedroom, she relaxed and breathed in deeply. She felt stupid for taking in Conner’s stories so much. She glanced over at the clock and groaned at the early hour.


Still trembling, she slid out of bed and reached for her pink silk dressing gown. She pulled it on with a wide yawn, shaking her head to wake herself up before making her way downstairs. Her wool carpet felt rough and very real beneath her bare feet, the perfect antidote to help bring her back into the real world. Traipsing through the silent house, she pattered through into her kitchen.


Snapping the fluorescent above on, Erin waited as its humming light came to life, allowing her to see the small kitchen, blinking at the brightness. Its tiled floors and white walls stung her sleep-deprived eyes for a moment, but Erin shuffled across the tiles to open one of her maple cupboard doors, feeling her way around the kitchen table in the centre. The door squeaked in protest on its hinges as she reached inside to take out a glass. Her eyelids heavy, she paced over to her kitchen sink, and ran water into the glass. The cool water filled up with a gurgle that only made her thirstier.


A quick movement in the shadows outside of her kitchen window caught her eye, and she darted her head up for a look, scanning the blackness of her small garden. Her heart thudded into life, hammering against her ribs in a warning staccato. Squinting harder, she leaned against the glass, her breath steaming the reflective surface up. Nothing moved, not even a wind danced across the stalks of grass outside.


“It must have been a cat or something,” Erin muttered to herself. She turned away from the window, scooping up her glass once more to take a sip, when she thought she heard a thump from outside again. It was quiet, so quiet she wondered if it had simply been the pipes all along. Her skin prickled as she listened intently, so intently that the next thump against her kitchen wall brought a sharp gasp from her.


“Alright, what the hell is that?” Erin said aloud, more bravely than she felt. She slammed her glass down on her kitchen table, the clanging noise serving only to heighten the tension. Stories about women who lived alone and ended up as a victim raced through her brain. Shaking those thoughts from her head, she slowly made her way towards the back door. Her head ached with the pressure of her pulse against her temples as she took a deep breath and unlocked her back door, flinging it wide open. As she gazed out, her eyes adjusting to the meagre light from behind, her throat dried with panic. She didn’t expect to see anything. Maybe teenagers messing around. But not this.


Standing less than six feet away from her door was a large, black wolf-like creature. It stood on four paws, but two glaring eyes focussed on Erin, very human and aware. It rose up slowly onto its back feet as it continued to stare at Erin, daring her to defy it standing there and dismiss it as shadows.


Erin froze for a second, the blood draining from her body in an icy rush. The wind blew between her and the creature chillingly, echoing the dream-like state she felt. Her tongue was dry and swollen—even if she had tried to call for help, her throat would never have formed the words. The creature moved a fraction forwards, and her sense of self-preservation snapped back into life as she moved, swiftly slamming the door shut. She fumbled hurriedly with her lock, and stepped backwards towards the hallway, switching the fluorescent off by accident as her hand slid along the wall. She tripped over a chair leg, unable to see in the dark, and cried out as she hit the hard floor.


Shaking and winded, she crawled backwards to the hallway, hitting the far kitchen wall instead. Sobbing noiselessly, she reached up onto the top next to her. She moved her fingers gingerly until she touched one of her kitchen knives, left on the top from when she had made her dinner. There is no way on Earth this is real. I’m still in my nightmare. I’m still in my nightmare. I’m going to wake up in a moment. Clutching the knife to her chest, she swallowed back a cry, glancing back towards the kitchen window. What if there are more of them?


Outside, she heard the creature breathing heavily, snarling and snuffling at her doorstep. Erin yanked her knees up until she was in a foetal position, tirelessly glancing between the door and the uncovered window. Hours passed, until eventually she heard the creature padding off, her head swimming with fatigue. Erin stayed up for what felt like hours, listening for the creature coming back, eventually falling into an uneasy sleep.

I'm Miranda Stork, and I'm addicted. Addicted to writing and reading books, anyway. And chocolate, but that's another issue - no interventions, please.


I live in the middle of a forest in North Yorkshire, spending my spare time as the wild woman of the woods, scaring small children and upsetting the sheep. On the days that I feel like being civilized, or I haven't got any unicorns to ride, I sit down and pour the tumbling thoughts in my head out onto digital paper. Mainly the thoughts and characters come out in paranormal form, with a good smattering of romance, because everyone likes a good cuddle. But you can also find strong elements of thrillers, myths, and even dystopia amongst the pages of all my novels. I've wanted to write books ever since I first realised that fairytales were not the newspapers of the fairy kingdom, but the imaginings of actual people who wanted to tell fancy made-up stories to other people. From that moment, I was hooked.


Why do I write? Good question. It might be easier to just keep the stories in my head, or even just to write them for myself. But I want to share them. There is no greater delight for a writer than when a reader devours your book, and declares, "Something in that novel resonated with me. And I want MORE." So grab your lucky clover and a baseball bat (there's some nasty paranormal creatures where we're going), eat the cookie with 'eat me' tagged on it, and enter through the tiny door into the world of Miranda Stork...

Tour giveaway 5 audiobooks, to be downloaded from Audible.co.uk or Audible.com (winner will be given a coupon with the necessary code for downloading a free copy).