Guest Post
3 Partners would like to thank author Gigi Pandian for sharing her time with us today. 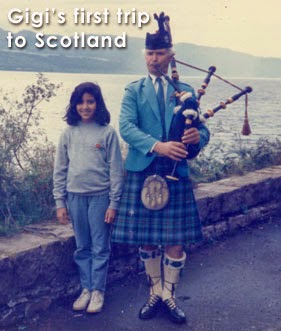 I went on my first trip abroad when I was 10 years old. I was tagging along to Scotland with my mom, a cultural anthropology professor doing research over summer break. We visited in Edinburgh and the Highlands of Scotland, both of which were completely different from my life in southern California! I was immediately hooked.


Scotland was such a mysterious place with its castle ruins, sweeping landscapes, and a fascinating history. I’m an only child, so I didn’t have any siblings to play with on the trip, so my mom made sure to keep me occupied with interesting adventures such as hiking through the Highlands, visiting the Loch Ness Monster, and learning about the history of castles.


But my mom also had research to do, so I was left to make up my own adventures. Even though I didn’t yet know I’d become a mystery novelist, I started writing mystery adventure stories when I was a kid. My parents were wonderful about encouraging my early writing, which gave me the confidence to try my hand at writing a novel in my adult life.


My first novel, Artifact: Jaya Jones Treasure Hunt Mystery #1, was inspired by my childhood trips to Scotland. I set the book in San Francisco, the British Library in London, and an archaeological dig in the Highlands of Scotland.


All the books are cozy adventures that take place in different parts of the world where I’ve spent time. My new novel, Quicksand, takes historian Jaya Jones across France, from Paris to Mont Saint-Michel.

A thousand-year-old secret room. A sultan’s stolen treasure. A missing French priest. And an invitation to Paris to rekindle an old flame….
Historian Jaya Jones finds herself on the wrong side of the law during an art heist at the Louvre. To redeem herself, she follows clues from an illuminated manuscript that lead from the cobblestone streets of Paris to the quicksand-surrounded fortress of Mont Saint-Michel. With the help of enigmatic Lane Peters and a 90-year-old stage magician, Jaya delves into France’s colonial past in India to clear her name and catch a killer.