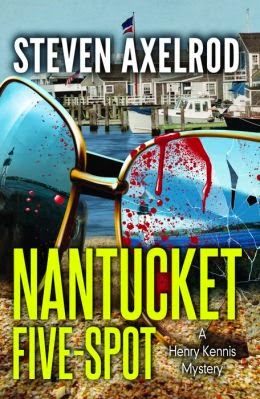 Henry Kennis, Nantucket island’s poetry-writing police chief who will remind readers of Robert B. Parker’s Jesse Stone and Spenser, works a second challenging case in Nantucket Five-Spot. At the height of the summer tourist season, a threat to bomb the annual Boston Pops Concert could destroy the island’s economy, along with its cachet as a safe, if mostly summer-time, haven for America’s ruling class. The threat of terrorism brings The Department of Homeland Security to the island, along with prospects for a rekindled love affair –Henry’s lost love works for the DHS now. The “terrorism” aspects of the attack prove to be a red herring. The truth lies much closer to home. At first suspicion falls on local carpenter Billy Delavane, but Henry investigates the case and proves that Billy is being framed. Then it turns out that Henry’s new suspect is also being framed –for the bizarre and almost undetectable crime of framing someone else. Every piece of evidence works three ways in the investigation of a crime rooted in betrayed friendship, infidelity, and the quiet poisonous feuds of small town life. Henry traces the origin of the attacks back almost twenty years and uncovers an obsessive revenge conspiracy that he must unravel –now alone, discredited and on the run –before further disaster strikes.

Steven Axelrod holds an MFA in writing from Vermont College of the Fine Arts and remains a member of the WGA despite a long absence from Hollywood. His work has been featured on various websites, including the literary e-zine Numéro Cinq, where he is on the masthead. His work has also appeared at Salon.com and The GoodMen Project, as well as the magazines PulpModern and BigPulp. A father of two, he lives on Nantucket Island, Massachusetts, where he paints houses and writes, often at the same time, much to the annoyance of his customers.

This is a giveaway hosted by Partners In Crime Virtual Book Tours for Steven Axelrod & Poisoned Pen Press. There will be one winner of 1 Box of Poisoned Pen Press books including Nantucket Fivespot. The giveaway begins on Feb 28th, 2015 and runs through April 3rd, 2015.


Nantucket has a Police Chief who solves crimes and also writes poetry. This novel is part of the series called, "A Henry Kennis Mystery", series. Nantucket residents and tourists are enjoying the summer when  get a threat that someone is going to bomb their Boston Pops Concert. Now, they are afraid that they will no longer be a  great place to spend anyone's summer. Henry soon decides it is not terrorism, but The Department of Homeland Security has already shown up. As Henry works to solve this mystery he proves that his first two suspects were framed by someone else. Henry has to solve this fast so that no one gets hurt. I give this book a 4/5.  I was given this book by Kregel Publications and all opinions are my own.