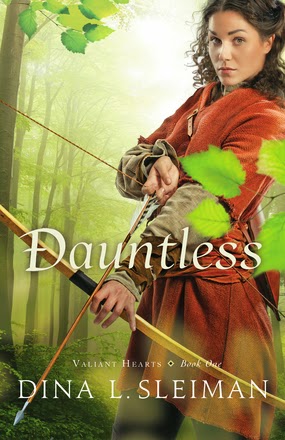 Where Legend and History Collide,
One Young Woman Will Fight for the Innocent

Born a baron's daughter, Lady Merry Ellison is now an enemy of the throne after her father's failed assassination attempt upon the king. Bold and uniquely skilled, she is willing to go to any lengths to protect the orphaned children of her former village--a group that becomes known as "The Ghosts of Farthingale Forest." Merry finds her charge more difficult as their growing notoriety brings increasing trouble their way.

Timothy Grey, ninth child of the Baron of Greyham, longs to perform some feat so legendary that he will rise from obscurity and earn a title of his own. When the Ghosts of Farthingale Forest are spotted in Wyndeshire, where he serves as assistant to the local earl, he might have found his chance. But when he comes face-to-face with the leader of the thieves, he's forced to reexamine everything he's known.

My review;
Dauntless is the story of a young woman who was born a Lady but is now on the run because her father tried to kill the King and failed. Now she has put herself in the position of caring for children that have no one else to look after them. They even have a name," The Ghosts of Farthingale Forest", and they are becoming very well known. Timothy Grey wants to be a Baron by deed rather than birth. So he tries to earn his title. Timothy wants to capture these orphans but when he meets Lady Merry Ellison he has to make a decision. He has to decide whether he wants money or something else. I give this book a 4/5. I was given this book for the purpose of a review and all opinions are my own.