Audray has just assumed the title as first-ever Queen of the Underworld.


As she attempts to consolidate her rule, characters from the past threaten to destroy her and the love she shares with Jonas Starling, a 300-year old dark angel. When she discovers she has been the recipient of a miracle, suddenly their whole immortal lives are changed forever.


Will they survive the coming war or get snagged in the power struggle over not only the underworld, but the human world as well? 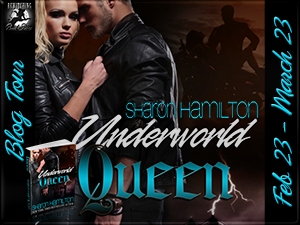 
Audray goes in search of her human past:
The seedy outskirts of her birthplace announced the town as surely as any billboard. Recalling how close the trailer park was to the freeway, she had no trouble locating Riverbend Estates, though the sign was still unrepaired from the rifle shots fired at it some twenty years ago.
Bet that would be a story.
She entered the potholed drive, avoiding two white chickens as they scurried past. There certainly wasn’t a river in sight, and these trailer homes were not estates—they were dumps on wheels. A small band of bedraggled children were playing with sticks at the side of the road. Girls in dirty rags and bare feet carried naked dolls by the hair.
Nobody was smiling, but they looked at the car.
Slowly, Audray pulled up to a concrete parking pad near the trailer with a torn front door screen. The door was open.
Is she home?


Sharon’s NYT and USA Today bestselling novels are almost-erotic Navy SEAL stories of the SEAL Brotherhood. Her characters follow a spicy road to redemption through passion and true love. This series continues with book 8, SEAL's Promise, which will release November 11, 2014. All of her SEAL Brotherhood Series are available in audio book. She has maintained an Amazon top 100 author status in Romantic Suspense for since the end of 2012.


Her Guardian Angels struggle with the human charges they are sent to save, often escaping their vanilla world of Heaven for the brief human one. You won’t find any of these beings in any Sunday school class.


Sharon lives in Sonoma County, California, with her husband and two Dobermans. A lifelong organic gardener, when she’s not writing, she’s getting verra verra dirty in the mud, or wandering Farmer’s Markets looking for new Heirloom varieties of vegetables and flowers.


"True Love Heals in the Gardens of the Heart"