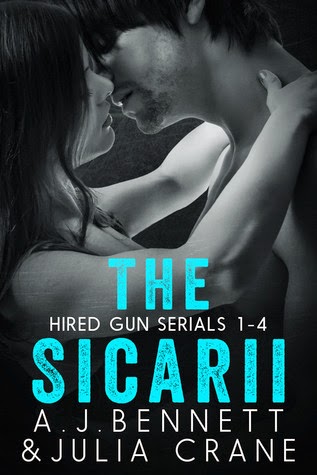 Tall, dark, and sexy as hell, Thorne Hollow knows the power he holds over the opposite sex and how to use it. Cast out by the gods thousands of years ago, he roams the earth working as an assassin for The Sicarii, a secret society who protects humans from all of the things that go bump in the night. One night stands are his way of life ... until he meets a mysterious woman whose intriguing power compels him to uncover more about her and the strange magic she wields. Completed Hired Gun Serial.BUY IT ON AMAZON: http://amzn.to/16KMisc

~*~ABOUT AJ BENNETT~*~
A.J. Bennett lives in Nashville, TN with her husband and bulldog. She's addicted to coffee, popcorn and books. Becoming an author has been a lifelong dream, and she's extremely excited about her debut novel Now or Never.FIND HER ON FACEBOOK: https://www.facebook.com/a.j.bennettbooks

Julia Crane is the author of the Keegan’s Chronicles, IFICS. She has a bachelors degree in criminal justice. Julia has believed in magical creatures since the day her grandmother first told her an Irish tale. Growing up her mother greatly encouraged reading and using your imagination. FIND HER ON FACEBOOK: https://www.facebook.com/juliacraneauthor