Dance of the Pink Mist by K.D. Brunt Book Tour and Giveaway 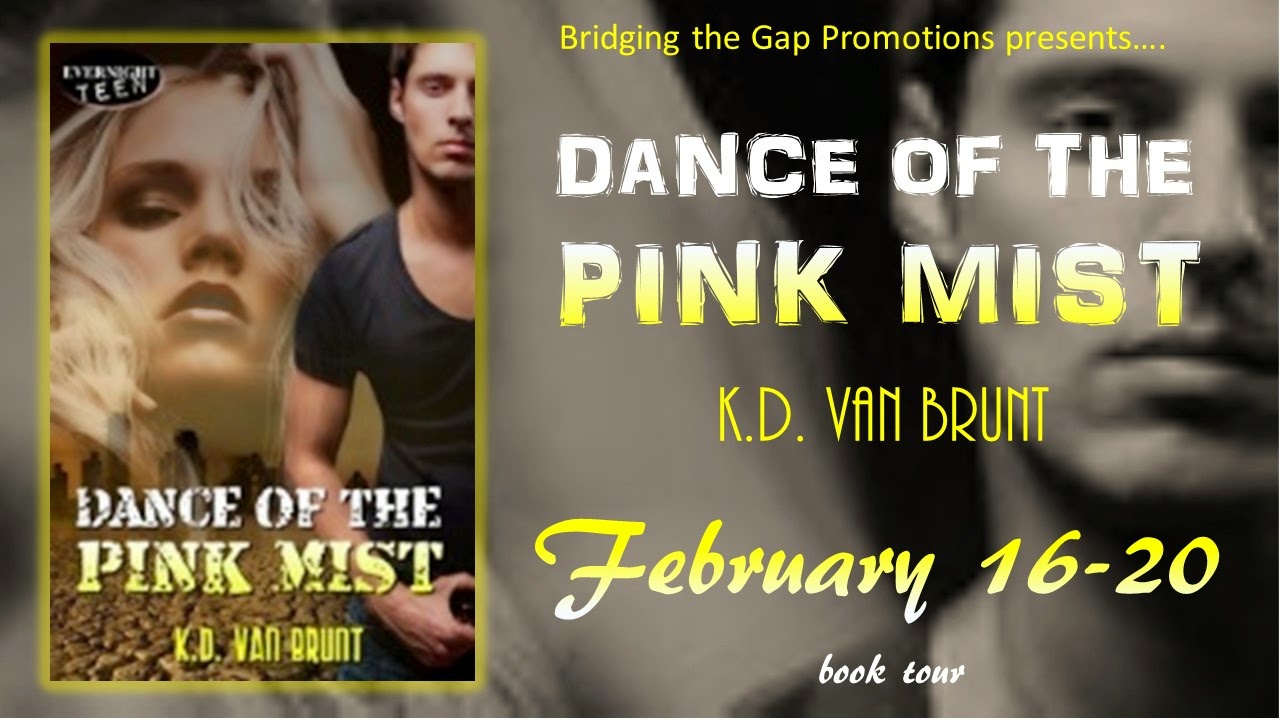 Dance of the Pink Mist
The Cracked Chronicles, Book 2 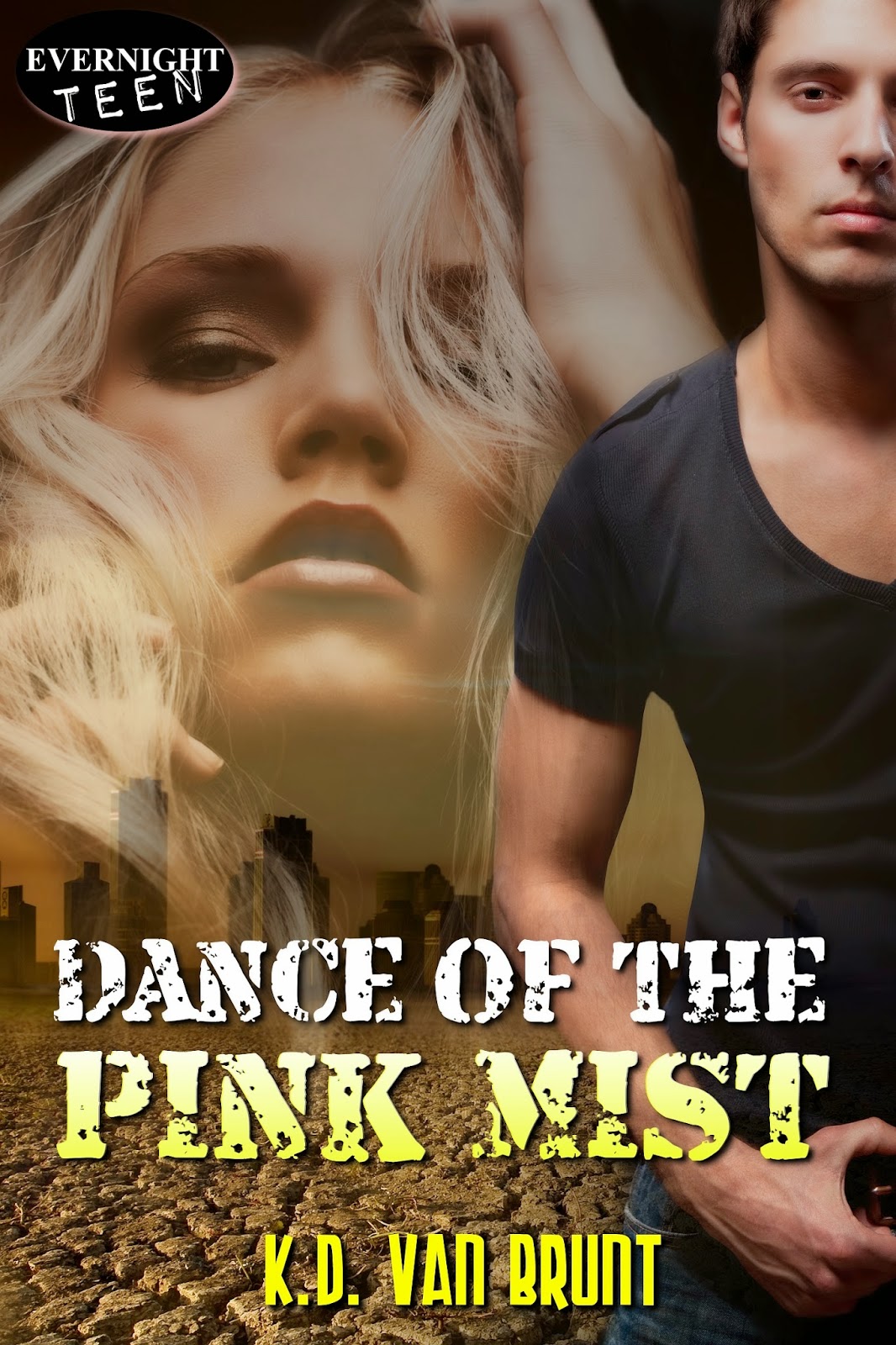 In the sequel to Win the Rings, Gray is now a prisoner at Cracked, forced to undergo combat training under the supervision of his nemesis, Jace.  He soon learns first hand why all the other kids at Cracked are scared to death of her, but he also finds a chink in her armor and they both realize they have an eerie connection to one another.

Gradually, Gray is drawn into Jace’s dangerous world of Special Ops missions, where death waits like a shadow in every corner.

For Jace, Gray poses a new kind of threat.  Although she’s proficient in all types of combat, Jace’s training hasn’t prepared her for him, and she is forced to confront feelings she has never experienced before.

Excerpt:
I give three raps on Jace’s door, precariously balancing an armload of her clothes in one hand and her newly pressed uniform jacket in the other.  I’ve been Jace’s personal valet and general all-around slave for over six weeks now, bustling from one task to another, while trying not to incur her prickly wrath.  And even though much of what she makes me do is demeaning, curiously I find myself stealing looks at her when she’s not paying attention to me.
“Come in,” Jace says through the closed door.
I try to stick my thumb on the bio-sensor pad next to her door, but the action causes me to lose my balance just enough to send the pile of clothes cascading to the floor.  There are no outside doorknobs here, just these small rectangular pads beside every door, which read your thumbprint and release the lock.
“Shit!” I curse.
I drop to my knees to salvage what I can and refold the rest.  The door opens behind me causing me to flinch.  I look up at Jace wondering if she’s going to give me a swift kick to the ribs for this, but she just stands in the doorway tapping her foot impatiently on the floor.  She has her arms folded across her chest looking peeved, and I see she’s dressed in old sweats and a loose-fitting camo tank top.  She doesn’t have a bra on.  For some reason I blush at this, as if I walked in on her while she was dressing.
“I should make you re-wash all of this, Gray, but I’m feeling generous tonight.”
“Excuse me.  Did you say Gray, sir?”  This would be the first time she’s used my first name since I got here.  Until now it’s been rookie, rook, newbie, new meat—among others terms of endearment.
She shrugs.  “I suppose you’ve earned the right to be called by your first name.  Don’t let it go to your head.”
“Thank you.”
“Whatever,” she says with a sigh.  “Now listen up.  My bathroom needs cleaning.  So get this mess picked up and get to work on it.”
Five minutes later, I’m standing in front of her dresser putting away her newly refolded clothes.  I’ve memorized by now the layout of her drawers—underwear and socks in the top drawer, shirts and pajamas in the second, pants, etc., in the third.  There’s a fourth and fifth drawer, but I’m not supposed to open those, so I don’t know what she’s hiding in there.  Finishing, I glance over at Jace, who’s sitting cross-legged on her bed flipping through a magazine—Jane’s Intelligence Review.  Gee, that looks like a fun read.   Her blonde hair is so fine and soft I feel this irrational urge to run my hands through it, even though she’d probably kick me in the groin if I tried.  She’s leaning forward to study the magazine and my eyes lock onto her tank top, which is gapping enough to almost flash her entire, braless chest at me.   I gawk for a moment, but then feeling like a perv, I advert my gaze.
“Don’t stare at me, Gray.  Get to work.  The cleaning supplies are under the sink.”
I nod, but I think I detect a subtle, knowing smirk on her face.
Every room in the dorm is laid out the same—a main living area and a small bathroom off one end of the room.  The best that can be said about the bathrooms here is they’re functional: toilet, sink and commode, and a shower.  No bathtubs.   Sighing, I pull out a bristle brush and get to work on the stainless steel toilet bowl.
“You ever been to Alaska, Gray?” Jace asks after a few minutes, when I’ve moved on to scrub the shower stall.
I hesitate, puzzled by the question.  “Once.  Anchorage, sir.”
I hear her sigh loudly.  “You can call me Jace from now on.  What was it like?”
I hesitate, briefly surprised by the realization I don’t have to call her ‘sir’ anymore, but at this point it’s been so deeply drilled into me I’m not sure I’m capable of calling her anything else.

K.D. Van Brunt
During the eight hours of the day when I’m not writing, reading or sleeping, I’m a lawyer in Washington, DC.  I grew up in Southern California, moved to Seattle before coming east to Boston to go to school.  Now, I live in the great state of Maryland with my wife, my dog—a standard poodle named Buffy (and who do you think named her?), and my hot Camaro.  One of the few things I like better than pizza is driving fast.  So, if you happen be in the DC area and a black Camaro with a red stripe and a rear spoiler roars by and blows your doors off…thaaat could be me.