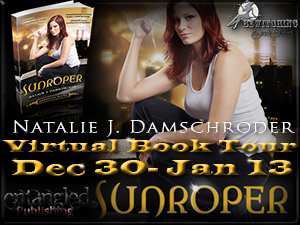 Marley Canton is done being a victim. A year and a half has passed since she discovered her ability to nullify power in those who aren’t supposed to have it. She’s now on a quest not only to stop the brats who’ve become addicted to goddess power, but also to find the source of their addiction.


Like Marley, Gage Samargo is tracking down the goddess who went rogue decades ago. Insane with too much power from the sun, she’s selling that energy to Gage’s younger brother and his friends, who are no longer content to come into power naturally. While they work to find a way to neutralize the goddess, Marley discovers that every time she nullifies someone, she takes on some of the goddess’s insanity.


Gage falls for Marley’s sharp wit and intense desire to right wrongs. But once he discovers she’s turning into her enemy, is it too late to back away?

Under the Moon by Natalie J. Damschroder , the first book in the Goddesses Rising trilogy, is on sale for just 99 cents from 12/26 to 1/8.

This is a great opportunity to start the trilogy (book three, Sunroper release Dec 31)
http://www.amazon.com/Under-Goddesses-Rising-Natalie-Damschroder-ebook/dp/B009G1X1Z0/


She wrapped both hands around the mug to absorb the heat. There was only one way to answer that question. “I’m fine.”

He said it with such compassion and lack of judgment that she blinked back tears, tilting her head to stare at the shadowed ceiling as if it had the power to keep the emotion at bay.

It was the perfect summation of everything she’d been analyzing a few minutes ago, and it broke her. She leaned to set the almost-empty mug on the nightstand and covered her face with her hands, suppressed sobs racking her body.

Gage’s fingers wrapped around her upper arms. He pulled her into his lap, settling her effortlessly and cradling her against his chest. He even rocked her. Marley’s sob turned into a giggle, a sound she hadn’t made in years.

“I might have broken down, but I’m still not a cradling kind of woman.” But she used to be.

Maybe it was okay to allow some of that back in. Her head fit just right in the curve of his shoulder, and his scent was as warm, spicy, and enticing as the cocoa had been. The shirt was soft, his thighs hard, and his arms encircled her protectively.

“My mistake. I thought you needed comforting.” He bent his head to nuzzle her, sending a cascade of tingles over her skin.

She drew a sharp breath at the desire that followed it, the need to touch and be touched overwhelming everything else. “No, comfort’s not really what I need,” she half whispered. She slowly tilted her head up until her mouth brushed over his.

His tongue flicked out for a half-second taste. Marley shuddered and twisted her hand into his shirt.

“You said this was bad,” Gage reminded her, but he’d shifted one hand to her rib cage, spreading his fingers to tease the side of her breast. 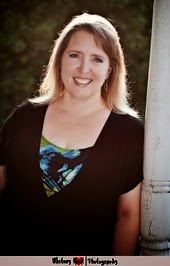 
Natalie J. Damschroder writes high-stakes romantic adventure, sometimes with a paranormal bent. She's published ten novels, seven novellas, and fourteen short stories, many of them exploring magical abilities, but all with a romantic core. She currently lives in Pennsylvania with her perfect partner of a husband and two amazing daughters. Learn more about her at her website.

January 3 Spotlight and review
Penny For Them...
http://pennyforthemuk.com/search/label/tour