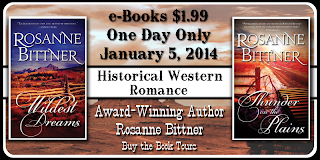 Genre: Historical Western Romance
Length: 561 pages
Published by: Sourcebooks Casablanca
Release Date: February 7, 2012
Lettie MacBride knew that joining a wagon train heading West was her chance to begin anew, far from the devastating memories of the night that had changed her forever. She didn’t believe she could escape the pain of innocence lost or feel desire for any man…until she meets Luke Fontaine.
Haunted by his own secrets, Luke could never blame Lettie for what had happened in the past. One glance at the pretty red-haired lass was enough to fill the handsome, hard-driving pioneer with a savage hunger.
Against relentless snows, murderous desperadoes, and raiding Sioux, Luke and Lettie will face a heartrending choice: abandon a lawless land before it destroys them, or fight for their…Wildest Dreams.

* * * * *
“Power, passion, tragedy, and triumph are Rosanne Bittner’s hallmarks. Again and again, she brings readers to tears.” — RT Book Reviews
“Excellent, a wonderful, absorbing read, with characters to capture the heart and the imagination…belongs on that special keep self; it’s a romance not to be missed.” —
Heather Graham on
Outlaw Hearts

Genre: Historical Western Romance
Length: 528 pages
Published by: Sourcebooks Casablanca
Release Date: July 3, 2012
In a Land of Opportunity
Sunny Landers wanted a big life—as big and free as the untamed land that stretched before her. Land she would help her father conquer to achieve his dream of a trancontinental railroad. She wouldn’t liet a cold, creaky wagon, murderous bandits or stampeding buffalo stand in her way. She wanted it all—including Colt Travis.
All the Odds Were Against Them
Like the land of his birth, half–Cherokee Colt Travis was wild, hard, and dangerous. He was a drifter, a wilderness scout with no land and no prospects hired by the Landers family to guide their wagon train. He knew Sunny was out of his league and her father would never approve, but beneath the endless starlit sky, anything seemed possible…


Thunder on the Plains – Excerpt

Following is a short excerpt from THUNDER ON THE PLAINS.  It should be noted that Sunny is our heroine, an extremely wealthy young woman who has inherited the unlikely position of being a key figure in the construction of the Transcontinental Railroad.  Colt (our hero) is an Indian scout (half Indian himself) who works off and on for the railroad builders and who comes from a far different world than Sunny.  Various circumstances keep throwing these two together, and in spite of the unlikely chance either of these two could belong in the other’s world, a deep passion and desire that they feel for each other keeps getting in the way of common sense, until finally … one afternoon … caught alone out on the prairie … (Colt has pulled Sunny onto his horse in front of him) –
* * * * *
“Tell me, Colt.  What does an Indian do with his captive?”
For a moment everything went silent for Colt. Nothing existed but the utterly beautiful woman in his arms … her blue eyes … her golden hair.  He moved a hand to rest against the flat of her belly.  “He takes her to his tipi and makes her his slave,” he answered, his voice gruff with passion.
She touched his face.  “That’s what I want you to do with me, Colt.  Make me your slave – today, tonight, tomorrow.”
He shook his head.  “Sunny –“
She touched his lips.  “Don’t say it, Colt. I don’t know what’s right and wrong anymore, and today I don’t care.  I just want you.  I’ve always wanted you. My first time just can’t be with anyone else.  I –“
His kiss cut off her words, a deep, hot kiss that removed any remaining inhibitions. She could barely get her breath for the thrill of it, the ecstasy of his hand moving to her breast, the ache of womanly desires that surged in her when his tongue moved between her lips.
Dancer moved slightly, and she clung to Colt.  He left her lips for a moment, keeping one arm around her as he slid off the horse and pulled her after him. 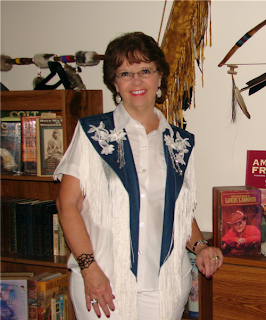 With more than 7 million books in print, RT Book Reviews Career Achievement Award-winning author Roseanne Bittner is beloved by fans for her powerful, epic historical romances.
Award-winning novelist Rosanne Bittner is highly acclaimed for her thrilling love stories and historical authenticity. Her epic romances span the West — from Canada to Mexico, Missouri to California — and are often based on Roseanne’s personal visits to each setting. She lives in Michigan with her husband and two sons.