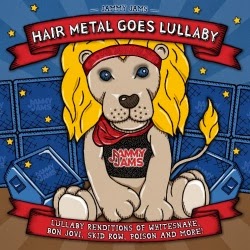 With their fourth release, “Hair Metal Goes Lullaby”, Jammy Jams elevates lullaby music to a whole new level of awesomeness. Whether you are a child of the 80s or are shopping for a little one born yesterday, these gentle lullabies will captivate and delight. You have to listen to believe that songs originally performed by heavy hitters like Mötley Crüe or Bon Jovi could be transformed into these incredibly peaceful and comforting arrangements. Like a hug from your best pair of spandex pants, Jammy Jams’ soothing sounds embrace, providing the reassurance needed for you or your little dream warrior to slip into a cozy slumber.

1. Every Rose Has Its Thorn (originally by Poison)

4. I Remember You (originally by Skid Row)

5. Lay It Down (originally by Ratt)

7. Livin’ On A Prayer (originally by Bon Jovi)


My review;  I liked these songs when I first heard them and I like them in this new way, too!  It is hard to believe that these are the same songs. The kids loved them and they want to listen to them before they go to bed or just to listen while taking a nap. These are really great. I received one or more of the products mentioned above for free using Tomoson.com. Regardless, I only recommend products or services I use personally and believe will be good for my readers.
Posted by 3 Partners in Shopping at 12:29 AM