Matt Archer: Bloodlines When seventeen-year-old Matt Archer set out on his last mission in the Australian Outback, he thought it would be like every other hunt. Not even close. After only two days on the ground, his best friend is possessed, a long-lost family member has returned and hidden truths have come to the surface. Add in a coven of witches bent on bringing about the end of the world and, well, this trip has started to suck. Badly. As his power and strength continue to grow, so does Matt’s concern that he’s becoming more and more like the creatures he’s been charged to hunt: a monster. Faced with some of his biggest challenges to date, Matt has to decide what he needs to protect most—his family, his team…or himself.

Matt Archer: Legend When Matt Archer was fourteen, he was chosen—by a magic, spirit-inhabited knife—to hunt monsters with a special paranormal division of the Army. When he was fifteen, he was thrown into a global war the rest of the world didn’t know existed. Now Matt’s sixteen and the war has cost him more than he ever thought it would. He’s also learned that the knife-spirits have an agenda he doesn’t totally agree with. The only problem? The spirits have the upper hand, and they plan to control the fight—and Matt. Then things get worse: the next lunar eclipse cycle is starting, a prominent physicist has gone missing, and Matt’s best friend is thinking about quitting the team. If he loses Will—after everyone else he’s lost—Matt’s not sure how he’ll fight alone. As the source of his nightmares starts to creep out of the shadows, Matt knows he’ll need all the help he can get…because being alone could prove deadly. 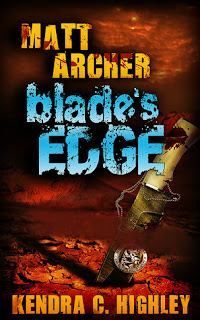 Matt Archer: Blade's Edge When Matt Archer was fourteen, he discovered monsters are real. As if that wasn’t enough to go on for a few decades, Matt also found out that he’d been chosen to hunt those monsters--with a sentient, supernatural knife. Now fifteen, Matt has spent the last year working with a clandestine military unit, trying to rid the world of monsters, demons and other vicious creatures, all while keeping it a secret from nearly everyone he knows back home in Billings. Including his mom. Add in a new girlfriend, family secrets, sibling drama and enough homework to sink an aircraft carrier, and Matt’s life has become more complicated than he ever imagined. Worse, the knife has developed some very definite opinions about Matt’s personal life and it interferes in his business whenever it wants. More and more, Matt’s coming to realize that sharing brain-space with a spirit kind of sucks. When stories of decimated towns and hordes of zombies start pouring into the Pentagon from Afghanistan, Matt knows he’ll be called up soon. Between the new mission and the knife’s increasing control over his mind, Matt wonders if he’ll survive long enough to take his driver’s exam. 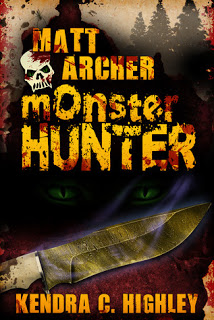 Matt Archer: Monster Hunter
Fourteen-year-old Matt Archer spends his days studying Algebra, hanging out with his best friend and crushing on the Goddess of Greenhill High, Ella Mitchell. To be honest, he thinks his life is pretty lame until he discovers something terrifying on a weekend camping trip at the local state park. Monsters are real. And living in his backyard. But that's not the half of it. After Matt is forced to kill a strange creature to save his uncle, he finds out that the weird knife he took from his uncle's bag has a secret, one that will change Matt's life. The knife was designed with one purpose: to hunt monsters. And it's chosen Matt as its wielder. Now Matt's part of a world he didn't know existed, working with a covert military unit dedicated to eliminating walking nightmares. Faced with a prophecy about a looming dark war, Matt soon realizes his upcoming Algebra test is the least of his worries. His new double life leaves Matt wondering which is tougher: hunting monsters or asking Ella Mitchell for a date?

Author Kendra C. Highley
Kendra C. Highley lives in north Texas with her husband and two children. She also serves as staff to two self-important and high-powered cats. This, according to the cats, is her most important job. She believes chocolate is a basic human right, running a 10k is harder than it sounds, and that everyone should learn to drive a stick-shift. She loves monsters, vacations, baking and listening to bad electronica.

Book Blast Giveaway $50 Amazon Gift Card or Paypal Cash Ends 2/2/14 Open only to those who can legally enter, receive and use an Amazon.com Gift Code or Paypal Cash. Winning Entry will be verified prior to prize being awarded. No purchase necessary. You must be 18 or older to enter or have your parent enter for you. The winner will be chosen by rafflecopter and announced here as well as emailed and will have 48 hours to respond or a new winner will be chosen. This giveaway is in no way associated with Facebook, Twitter, Rafflecopter or any other entity unless otherwise specified. The number of eligible entries received determines the odds of winning. Giveaway was organized by Kathy from I Am A Reader, Not A Writer http://iamareader.com and sponsored by the author. VOID WHERE PROHIBITED BY LAW. a Rafflecopter giveaway -- ~Inspired Kathy~ I Am A Reader, Not A Writer
Posted by 3 Partners in Shopping at 12:04 AM