Clarity of Lines by N.R. Walker Blog Tour and Giveaway


Sometimes it’s not the two people in a relationship who fight falling in love, sometimes it’s those who love us that fight against it the most.


Finally together, forty-four year old Tom, and twenty-two year old Cooper, are ready to show the world they’re together. They’ve established their relationship is worth it, and want to share it with their families.


Both men thought accepting the age difference was their adversity to overcome, and theirs alone.


Their loved ones, however, will prove them wrong.


For their families, lines are drawn and start blur. Through a series of events, life shakes Tom’s foundations, the lines for him have never been clearer. 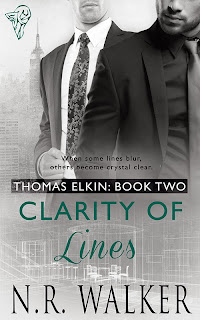 
The blueprints on love, life and careers are sent back to the drawing board as both men realize their plans are about to be re-drawn forever.


Generation versus generation, traditional versus contemporary, they’re about to prove to the world that the old and new can be the perfect design.


The view from my office was spectacular. It was a beautiful clear day, the sky was a brilliant blue and while most people would have cursed having to work, I was still smiling. Line five on my desk phone lit up. My personal line. I picked up the receiver knowing who it would be.


A familiar voice spoke in my ear. “Mr Elkin.”


I chuckled into the phone. “Mr Jones.” It was the third phone call that day. “Don’t you have enough to do?”


“Oh, I have plenty,” Cooper answered. “But you haven’t agreed yet.”


“I told you it wasn’t really my scene,” I told him again. “Why don’t you take one of your other friends?”


Cooper had two tickets to see some god-awful too-loud band at Madison Square Garden, and right or wrong he wanted me to go with him.


“Is this not something we could discuss over dinner?”


“I like annoying you at work,” he said cheerfully. “Usually if I pester you enough, you’ll just agree with me to shut me up.”


I groaned. “Is that a skill you work on, or is it a natural-born talent?”


He chuckled into the phone. Then his tone of voice changed to a playful whisper. “Come on, baby. You know you want to. It’s Linkin Park. They’re my favourite.”


He burst out laughing this time, and I sighed. “I’ll talk to you about it tonight,” I told him. “Will you come over?”


“That depends.” I could tell he was still smiling.


“On you saying yes to the concert.”


I hung up, still smiling, and not even half a minute later, my private line lit up again. I pressed the flashing button and laughed. “All right, I’ll go with you if it will shut you up so I can get some work done.”


Except Cooper didn’t laugh. There was only silence. I quickly checked the line to confirm it was on my personal line and not a business call, just as another familiar voice said, “Excuse me?”


I have pretty, pretty boys who live in my head, who don’t let me sleep at night unless I give them life with words.


I like it when they do dirty, dirty things…but I like it even more when they fall in love.


I used to think having people in my head talking to me was weird, until one day I happened across other writers who told me it was normal.


I’ve been writing ever since…


Where can you find me?


Giveaway – 3 ebooks from N.R. Walker’s Backlist Rafflecopter Code - a Rafflecopter giveaway
Posted by 3 Partners in Shopping at 12:05 AM