Hijack in Abstract by Larissa Buy the Book Tour and Giveaway 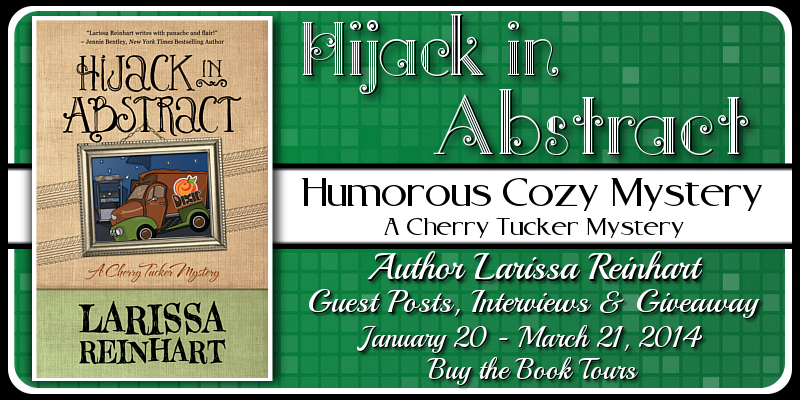 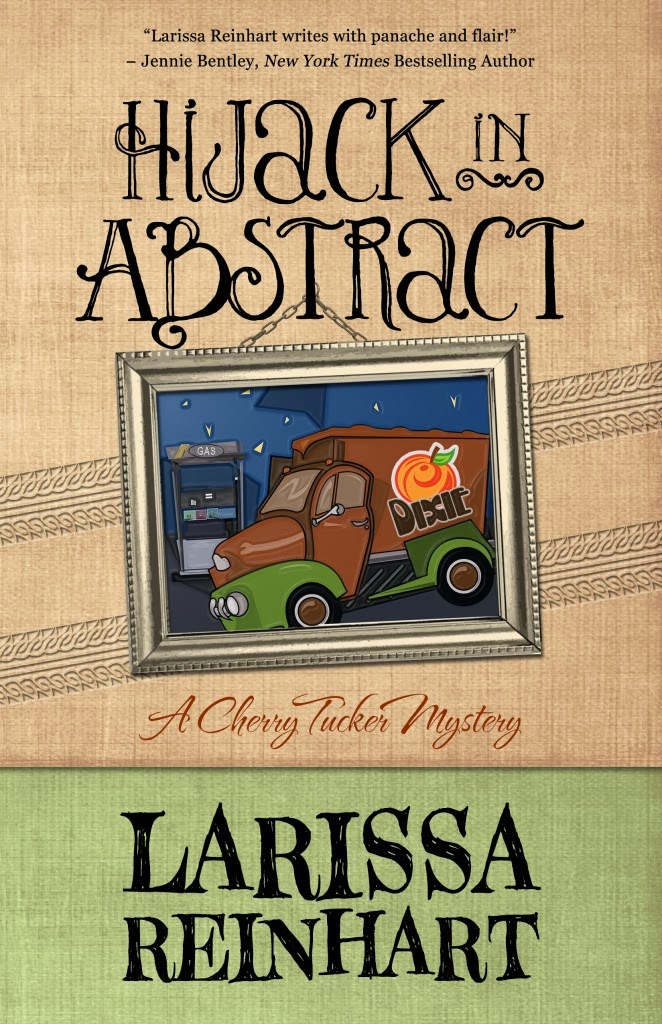 There are many places you don’t want to be at zero dark thirty, but I’ve got a personal top three. One is the ER. Second is a police station. The third is your ex-boyfriend’s bedroom.
Thank God Almighty I was not in number three. Stupid does catch me occasionally, but not this night. I was nowhere near an ex-boyfriend’s bedroom.
At two forty-five in the morning, I found myself in number two. The Forks County Sheriff’s Office to be accurate. My cornflower blues were a bit bloodshot and blurry, but my grin matched Shep Peterson’s, who also found himself in a similar location. However, Shep had a drunk tank grin. Mine was more of a self-congratulatory grin, born from knowing that finally someone in Forks County had recognized my accomplishments in the art world. Never mind the phone call that woke me from a dead sleep and near gave me a heart attack.
Or that I had to drive my sister’s Firebird because her vehicle was blocking my driveway. Or that I now sat in the junior officers’ room with a cold cup of coffee and had just realized I had forgotten to comb my bed-head designed blonde cowlicks in my bleary-eyed haste.
And to put on a bra.
The Forks County Sheriff, Uncle Will, needed my expertise. That’s all that mattered. And I was going to get paid.
Needed me for what was still a bit vague. I hoped nothing needing brushed hair and a bra.

* * * * *
With my messenger bag bumping my back, I hugged my chest, figuring it best not to give an extra show to Shep and the boys. I followed Uncle Will down the hallway, waiting while he unlocked a door. The door opened and two faces turned to look at us. One I didn’t recognize, but judging by his despondent expression, I figured he was probably in a mess of trouble. The other person, another deputy, I identified immediately. Hard not to recognize those brown ochre curls with the highlights I had decided were transparent oxide-red lake. Or the lean, muscled body, much like Michelangelo’s David. Or by the strong jaw buttressing two adorable dimples that made a rare showing.
Unfortunately, I knew Deputy Luke Harper a little too well.
He gave me a scant nod and turned back to the perp.
My hand snuck back to my hair and yanked on a particularly tall cowlick in back. I gritted my teeth and gave myself a quick lecture not to make a scene. We had aired our irreconcilable differences behind the local roadhouse, Red’s County Line Tap, a few months ago and I had not quite recovered.
“That’s Tyrone Coderre,” said Uncle Will. “He’s going to give you a description to draw. We need a composite sketch.”
Uncle Will stopped me before I entered the room and pulled me to the side. “Can I leave Deputy Harper in there with you or do I need to call in another officer? Harper’s the one who picked up Coderre, so this is his investigation.”
“I’m quite capable of separating my personal and professional life,” I said, tilting my chin so I could eyeball Uncle Will. “You might want to ask the same of him.”
“I trust Luke not to screw up his job. You are another story.”
I gave him a “why, I never” gasp.
“I’m going to be watching through the two-way.” He tapped my messenger bag. “Lucky for you, I don’t know other artists to call during the middle of the night. Wouldn’t want to be accused of nepotism. But I want a sketch while the memory is still fresh in Coderre’s mind. Don’t disappoint me, Cherry.”
“So, this is an important investigation?” Excitement zipped through my veins and made my fingers tingle. “I won’t let you down. You can even deputize me if you want.”
Uncle Will chuckled. “Just draw us a good picture. That’s plenty helpful.”
“Yes, sir,” I said and snuck by him to enter the room. I nodded to the man in the black sweat suit behind the table and held out my hand. “Hello, Mr. Coderre. I’m Cherry Tucker, a local artist.”
“Don’t shake his hand,” barked Luke. “Are you crazy?”
Tyrone Coderre’s cuffed hands retreated below the table, and I blew out a hard breath.
Looked like it was going to be a long night. At least the criminal had manners.
Couldn’t say the same for the cop. 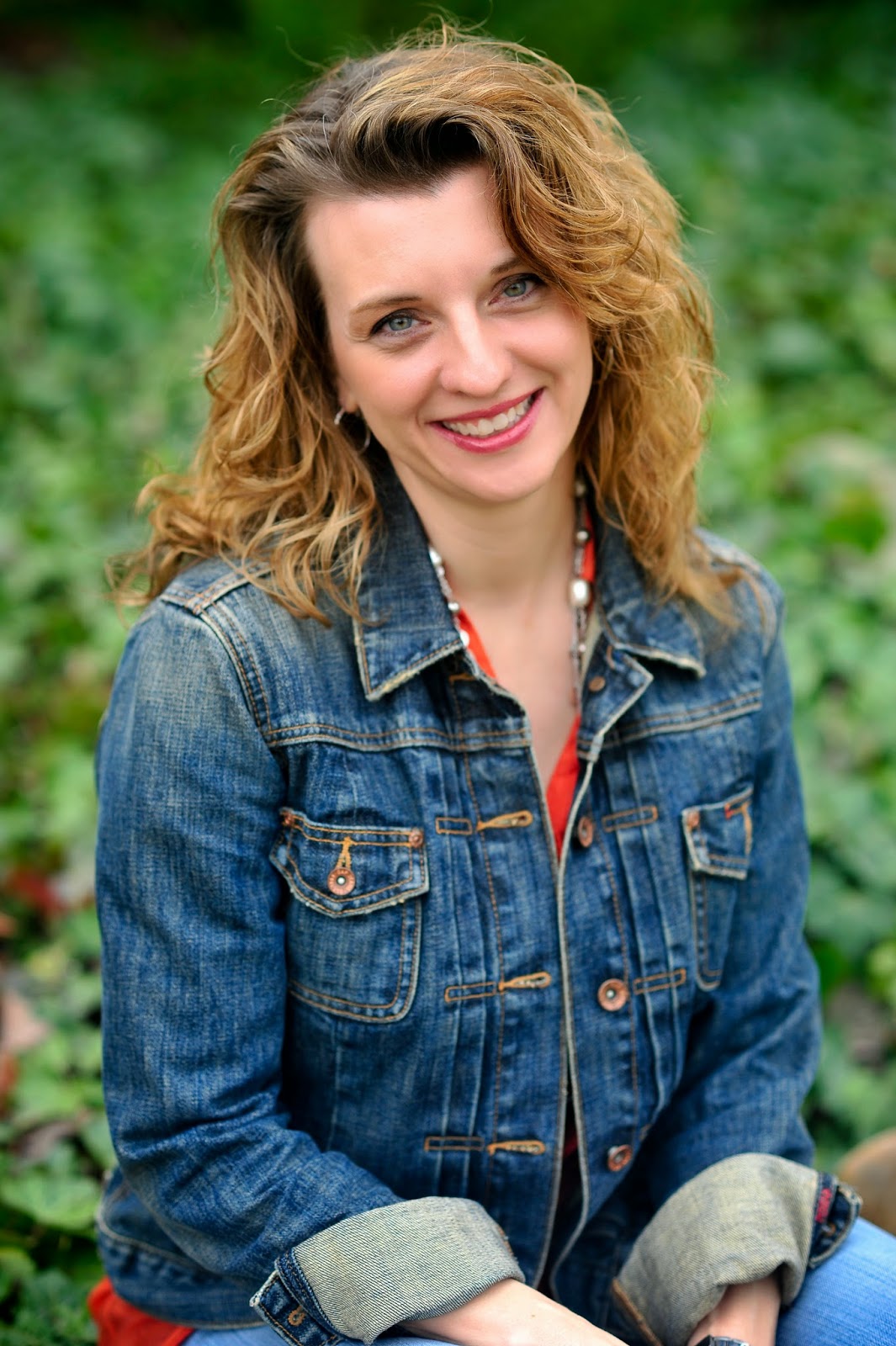 Growing up in a small town, Larissa Reinhart couldn’t wait to move to an exotic city far from corn fields. After moving around the US and Japan, now she loves to write about rough hewn characters that live near corn fields, particularly sassy women with a penchant for trouble.
HIJACK IN ABSTRACT is the third in the Cherry Tucker Mystery Series from Henery Press, following STILL LIFE IN BRUNSWICK STEW (May 2013) and PORTRAIT OF A DEAD GUY, a 2012 Daphne du Maurier finalist. QUICK SKETCH, a Cherry Tucker prequel to PORTRAIT, is in the mystery anthology THE HEARTACHE MOTEL (December 2013).
Larissa lives near Atlanta with her minions and Cairn Terrier, Biscuit. Visit her website or find her chatting with the Little


Guest Post; Thank you so much Larissa for being a guest on our blog today,

When I began writing my first Cherry Tucker mystery, PORTRAIT OF A DEAD GUY, I was living in Japan. My family and I enjoy living overseas, and we loved Nagoya, Japan. However, while living in Japan I didn’t feel pulled to write a story that took place in the city and country we habitually explored. I felt compelled to write about our other home in Georgia. Specifically, small town Georgia (as I’m a small town girl). That’s how my brain works. It never makes things easy for me.


The Cherry Tucker stories mostly take place in the fictional small town of Halo, Georgia, within the fictional county of Forks. Sure, the murders in the second book, STILL LIFE IN BRUNSWICK STEW, happen south of Halo, an even smaller town of Sidewinder. In the third book, HIJACK IN ABSTRACT, Cherry’s all over the place: Halo, a shanty town called Sweetgum, the Forks county seat of Line Creek, and even the Big Peach, Atlanta. However, the Cherry Tucker stories are about Halo. I can’t visit Halo, but I know Halo. I grew up in a farming village still holding at a population of 600. Halo’s more like the town where I went to school, much bigger with 3,000 people, but Southern. Halo’s an composite of the area of Georgia I have lived in for the past fifteen years (minus my times in Japan) and the country towns I knew growing up.


But Halo is more than a town. Halo itself is a character. Halo’s a little run down, but remembers its whistle-stop heyday splendor. Although Halo struggles with rumors of murder and gambling within its borders, the town keeps its collective chin up before other towns in the county. This becomes even more apparent in the second book in the series. I grew up seeing the judgement of people from one small town over the small town of another. Town pride can be fanatical, something you don’t see as much in the suburbs. I found the irony humorous (I find most pot and kettle judging humorous), and wanted to transfer that humor to Halo.


Small town attitudes are much the same anywhere in the country. I even found that to be true in Japan. In some ways, there’s more individuality and more outward eccentricities, but less tolerance of nonconformity in community mores. I love these juxtapositions. Old Joe Johnson can be free to walk the town in a robe, galoshes, and boxer shorts (because that’s what he’s always done) but dammit, he better not stiff the Boy Scouts at their hootenanny fundraiser, because didn’t Eleanor Martz bake him a casserole when Joe got laid up? And everyone knows Eleanor’s son is planning on making Eagle Scouts. So it goes...


Halo may not have a Walmart, but they have pride, dagnabit. Pride in their citizens (whatever they may say behind their backs), pride in their location (USA, the South, and Georgia, not necessarily in that order), and pride in their past (Sherman may have burned the town, but he didn’t bury the people). I love small towns, and wish I could visit my little, fictional Halo.