The Execution by Sharon Cramer Book Tour and Giveaway


D’ata, a young priest, is a dark angel amid the death and despair of the medieval prison. As he enters the cell of the condemned man—the mercenary, the evil one—D’ata is immediately transfixed by the killer’s eyes. He is shocked to discover that the face of the murderer is his own—a mirror image of himself.


The twins, unknown to each other until now, reveal the life events that brought them to this fetid dungeon, creating an unbreakable bond sealed with their darkest secrets. But with only hours until the execution, D’ata begins to question which man should truly be condemned. Should it be Ravan, the ruthless killer—a boy from an orphanage who suffered the unimaginable? Or should it be himself, the man of God whose own tormented desires ended in tragedy for the only woman he ever loved…and in the inescapable darkness of his own soul?


As the sun rises, D’ata knows what he must do. Only one man would die…but two men would be free. 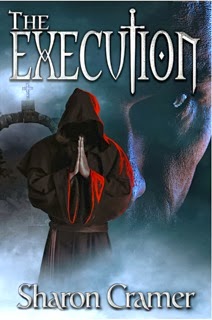 
Sharon Cramer is an aspiring time-traveler, overlord(ess), alien princess, and master painter of Halloween faces. In the meantime, she writes from a dank, dark cave, somewhere in Washington State. She's just released the first in an epic Sci-Fi fantasy series called THE CERULEAN STAR, and has a breakthrough novel, beloved by an amazingly loyal following, called THE EXECUTION. Movie release 2015!


When not painting monsters and planning historical ruin and perfectly crushed hearts, Sharon can be found on horseback, running through the woods of Eastern Washington. Driven by sleeplessness and a seemingly endless draw to the keyboard (and the more than occasional extra strong coffee) she is inspired by unorthodox friends and extreme weather. Mother to three sons, a nerd horse, a bad cat, and eleven fish (who all have names) she is married to a man who surely has won the Nobel Prize for Extreme Tolerance.


Giveaway ($25.00 Amazon or B&N Gift Card and THREE Digital Copies of THE EXECUTION)