The Haunting of Secrets


Tag Line: With her ascension, she gained great power. Now the lure of infinite power over others will cause the monster within to be Unleashed. 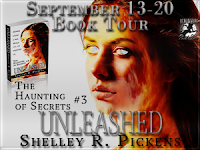 Aimee killed a man. Worse yet, she enjoyed it.


Aimee has survived a bombing, a killer’s torture chamber, countless evils harbored deep within the minds of psychopaths and killers, and even death. But now, the greatest threat is the evil barely contained within.


With her ascension, Aimee gained great power. She no longer needs to touch a person for their every memory and thoughts to be divulged. With that power, she now feels the pull to become judge, jury, and executioner to those who commit evil in this world.


Despite her desire to be alone with Logan and live a normal life, she soon realizes that she, in fact, is the greatest threat to the normality she craves. Without control of her own powers, she inadvertently causes harm to those she loves the most.


Aimee is forced to seek out the only other person in this world that can help her: Brett.


Together, they explore the world as ascended beings, reveling in the intoxication of mind control, as flames of love ignite between them. With each new emotion explored, the reasons behind the origin of her powers are slowly revealed.


But a dark threat looms in the horizon —a sinister plot that will cause the monster within Aimee to emerge.


With Logan kidnapped and Brett unable to face his sinister father, Aimee must battle the lure of infinite power to save the two boys that hold her heart captive.


Or risk being lost to the evil forever.


I killed a man. Worse yet, I wanted to kill him. The darkness I’ve fought so hard to keep out of my life had somehow seeped into my soul without me knowing it. My ascension brought great power, but at a horrible price. All it took was a moment. A fleeting thought, and when it was over, the man before me, lay dead and my soul cried out in agony. I stand above him now, watching my reflection as it bounces off his lifeless eyes. This isn’t the girl I’m supposed to be. The girl I know would never have harmed a living soul. Yet, here’s the proof right in front of me, staring lifelessly into nothingness. I know he never saw death coming for him because his expression is a strange mixture of pain and surprise. I want to help him, but there’s nothing I can do, he’s gone. I watched his thoughts end, his soul disperse to the sky above. Still, his face remains stubbornly determined; like he wants nothing more than to return so he can admonish me for my sins. But he can’t.


And I’m the reason why.


I slowly back away from him, still unsure of what to do. My progress is halted abruptly when I run straight into a solid wall of muscle. His arms come around to embrace me from behind. It’s comforting despite the complete inappropriateness of it in the face of death. He holds me as I stare helplessly; hovering over the body of the man I just destroyed.


I turn around and look at my companion, my equal in both power and stubbornness. “No, I didn’t. I did what I wanted to do. For that, I’m going to burn in hell.”


My self-proclaimed soul mate stares at me with a puzzled look on his face. He seems confused, as if hell is a place that shouldn’t be feared. After all I’ve been through in the short sixteen years of my life, I’m more certain than ever that hell is very real.


And it’s a place I now seem destined to visit.


Though my companion seems understanding and empathetic of my remorse, he isn’t quite able to hide the pride he feels for my eliminating someone with my powers. I don’t need to see his thoughts; it shines clearly through every aspect of his expression.


He moves his hands up to cup my face, catching the latest tear as it falls from my regret filled eyes. “Then we shall burn in hell together, my dark princess.”


The Haunting of Secrets Book 1

Unhinged The Haunting of Secrets Book 2


The Haunting of Secrets https://youtu.be/cQvKX0rb-Zg


Shelley Pickens is a Spanish teacher by day and a novelist by night. She's been in love with everything paranormal since she can remember. After years of teaching high school students, she decided to take her firsthand knowledge of young adults and apply it to her passion for creative writing and fantasy. When not teaching or writing, Shelley likes to spend time with her husband and two beautiful children in Atlanta, Ga. Her escape from reality is her love of complex thriller and science fiction TV series like Supernatural and Sleepy Hollow. In her spare time she is an avid watcher of little league baseball. THE HAUNTING OF SECRETS is her debut novel.


You can connect with Shelley Pickens at: