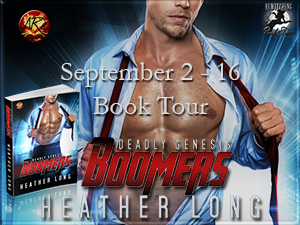 
To save her sanity may cost him his mind...


Kidnapped and experimented on by R.E.X. labs, Amanda's memories are foggy. She can't recognize friend from foe and she strikes out with everything she has. Only one man penetrates the storms surging in her mind, a soothing stranger with hypnotic eyes…


Mission: save Corkscrew or terminate her


Cautious, methodical Simon has always been careful to keep his innermost self, contained. Simon must confront his fears—and his deepest secrets—to help the powerful mutant rein in her abilities in.


With new enemies closing in and dark revelations unfolding, the Boomers face their greatest challenge yet and the deeper into her psyche Simon pushes, the more her madness threatens them all…


Winning never felt so much like losing. The team has recovered Corkscrew, but she is lost to insanity. Simon, the most cautious of them all, must risk everything to bring her back from the brink, but losing this gambit could cost them Simon as well.


Simon Masters opened the front door with a push of his hand and the house shuddered. Glass trickled down from the chandelier hanging over the foyer in a tinkling shower of shattering pieces. Plaster dust floated in the air like snowflakes. Doctor Ilsa Blaine slid around the corner from the kitchen, blood trickling from a cut on her forehead.


Every cell in his body went on alert. He shut the door with a thump and strode across the hallway, adjusting his balance for the next shattering quake shaking the room. "What happened, Doctor?"


"The sedatives aren't keeping her down anymore." Ilsa flinched as another shatter echoed from the kitchen. Simon caught her arm, steadying her. Images flashed through his mind in rapid succession, despite his gloves and her lab coat. Her anxiety levels were too high to keep them out. He shored up his shields and tried to sort through the massive influx of data.


Amanda Kincaid, also known as Rory's teammate Corkscrew, was awake. They’d rescued her a month ago from a research facility, but Ilsa's attempts to correct the damage done by a faulty chip in her brain continued to fail. Winning never felt so much like losing.


"Where are the others?"


The house shook and a splinter appeared in the doorframe. A shout of alarm echoed from upstairs. Simon canted his head back. Sweeping the house, he identified five awake minds—none Boomers or Rory's teammates. Fear seemed prevalent in the thoughts of four—but the fifth remained apathetic. Downstairs, however, Amanda's thoughts were a cyclone of pain, confusion, frustration, and rapidly escalating fury.


"Rory called in. She needed backup—” But Simon didn't hear the rest of the explanation. Amanda's chaotic thoughts grew more agitated. Setting Ilsa against the door frame, he gave her a quick glance.


Stay here. If the wood splinters further, get out. He embedded the command in her mind and dodged the falling debris in the kitchen. Since her rescue, Corkscrew's behavior grew more and more erratic. She lashed out, attacking anyone she didn't know and, unfortunately, even some she did. Rory could talk her down, Rex could contain her and Drake could take her hits—but none of those three were present. Ilsa had made the difficult decision to put her into a medically induced coma while her brain healed.


But that didn't seem to be working anymore.


The laboratory downstairs contained the latest equipment, and they’d expanded it for Ilsa's research. The Hamptons mansion doubled as their medical facility since Ilsa joined their quest for answers. Her relationship with Garrett Fox and the peace she brought him aside, she was an invaluable member. Her knowledge of neuroscience and the workings of their bio-mechanical chips continued to provide them with data crucial to the completion of their mission.


Heather Long likes long walks in the park, science fiction, superheroes, Marines, and men who aren’t douche bags. Her books are filled with heroes and heroines tangled in romance as hot as Texas summertime. From paranormal historical westerns to contemporary military romance, Heather might switch genres, but one thing is true in all of her stories—her characters drive the books.


When she’s not wrangling her menagerie of animals, she devotes her time to family and friends she considers family. She believes if you like your heroes so real you could lick the grit off their chest, and your heroines so likable, you’re sure you’ve been friends with women just like them, you’ll enjoy her worlds as much as she does.


For more information on other books by Heather, visit her website: www.heatherlong.net

Tour giveaway 3 winners to receive an eBook published by All Romance.