In Another Life by Carys Jones Book Tour 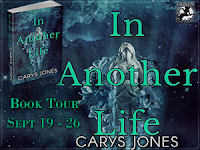 
Returning home one weekend Marie Schneider’s life changes forever when her car collides with a lorry on the motorway and she is left fighting for her life. Whilst in a coma, Marie awakens in the fantastical world of Azriel which appears to be right out of the pages of a Fairy Tale book. Here, Marie learns that she is their long lost Princess North, and that Azriel is where she truly belongs.


When Marie eventually wakes from her coma her thoughts of Azriel are still very present in her mind and she struggles to adjust to her 'normal' life. Everyone around her insists that Azriel is just a figment of her imagination but as she tries to recover from her wounds people start approaching her on the street, insisting that Azriel needs her and that she must return there at once.


Confused, Marie tries to discover which reality is the right one. Could she truly be a long lost princess from another world or is she just losing her mind? As the world of Azriel starts to creep in to her current life it gets harder for her to ignore that perhaps she really is Azriel's Princess after all...


The unusually bitter October wind pulled at loose strands of Marie’s hair as she walked briskly along the busy pavement. Checking her watch she noticed with a plunging sensation in her stomach that she was already running five minutes late.


“Damn it,” she cursed aloud as she tried to increase her walk from brisk to fast. Her high heeled shoes clipped manically against the floor creating a sharp staccato soundtrack to her commute.


With as much speed as the six inches of her stilettos would afford her, Marie descended down from the pavement and the ominous grey clouds overhead into the underbelly of the city and the tube railway system.


Despite having lived in London for almost eighteen months Marie still struggled to accept the infiltration of her personal space each time she rode the tube to work. People would push up against her as though she were completely invisible. She’d learnt to use her bony elbows as a weapon against the more persistent of intruders. Clutching her handbag tightly to her chest she boarded her train, moving with the same militant precision as the commuters around her. Everyone seemed to move with such urgency, as though their very being depended on boarding the waiting train before them.


As the train surged in to motion and swept the passengers deeper into the city, Marie dared to remove one hand from her hand bag to wipe wearily at her eyes, careful not to smudge the mascara she’d barely had time to apply.


Marie was tired. The previous night, like all the nights before, the twenty seven year old had struggled to sleep. She lay awake, anxious, as though she were waiting for something though she had no idea what.


It took twenty minutes for Marie’s train to arrive in central London. Not quite long enough to remove her Kindle and delve in to the latest fantasy novel she was reading. She thought about the story as she looked forlornly out of the train windows. Endless miles of nothingness sped by. She missed travelling through the countryside and looking out and seeing endless fields of luscious, green grass. Marie Schneider was a city girl by necessity, not choice. She’d grown up amongst trees and fields not sky scrapers and stop signs.


Every morning as she stood on the tube she wished the same thing; that she didn’t have to go to work that day that instead she could stay home and read and get lost in another world.


“You spend far too much time with your head in books,” her mother would note with disapproval.


“Reading stories won’t get you anywhere,” she’d add callously. Marie would just roll her eyes. Her mother didn’t understand the magic which existed within a great story. She was too pragmatic, existing only in the moment. But Marie dared to dream bigger. She always secretly harboured the belief that she was meant for great things, that her destiny would somehow be wondrous.


Yet as she stepped off the tube and an overweight man in a suit already covered in sweat pushed a little too close up against her Marie realised she was hanging on to her romantic notions of a better life with a very thin thread.


“Excuse you!” Marie exclaimed as the man peeled himself off her and headed towards the escalators. He didn’t so much as turn back and offer an apologetic glance.


“Chivalry is so dead,” Marie muttered to herself as she straightened her blue dress which was adorned with patterns of white tipped daisies. Checking her watch she realised she was still running late, so taking the briefest moment to tuck back any loose strands of hair which had wrangled themselves free of the bun at the nape of her neck Marie headed out of the tube station, back up to the surface.


Emerging in to the dim light of an autumn morning Marie squinted slightly, feeling momentarily as blind as a mole squinting up from the ground. She could scarcely afford even a second to get her bearings. Her boss, Amanda Pickens loathed tardiness almost as much as she loathed those who opposed her right to wear real fur.


When Marie finally pushed her way through the glass doors of the office building where she worked her cheeks were flushed and a slight spattering of perspiration had formed upon her forehead.

Carys Jones loves nothing more than to write and create stories which ignite the reader's imagination. Based in Shropshire, England, Carys lives with her husband, two guinea pigs and her adored canine companion Rollo.


When she's not writing, Carys likes to indulge her inner geek by watching science- fiction films or playing video games.


She lists John Green, Jodi Picoult and Virginia Andrews as her favorite authors and draws inspiration for her own work from anything and everything.


To Carys, there is no greater feeling then when you lose yourself in a great story and it is that feeling of ultimate escapism which she tries to bring to her books.